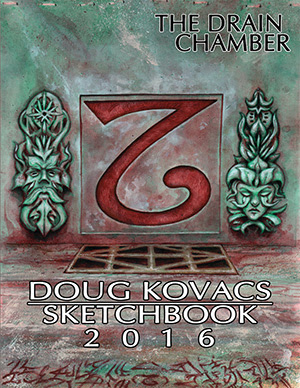 The Drain Chamber: Doug Kovacs Sketchbook 2016 was written and illustrated by Doug Kovacs, with an introduction by Joseph Goodman. The publisher is Goodman Games.

I would imagine that Joseph Goodman feels much the same, because he gave each of them a chance to showcase their work in three unique products: The Devil's Chapbook (Harley Stroh), The Drain Chamber (Doug Kovacs), and Scrivener of Strange Wor(l)ds (Michael Curtis). Each may be considered a compilation of fragments, and an insight into works in progress.

You might imagine that, as an artist, Doug Kovacs offers the least directly game-able content of the three. In some ways, you would be right, as the focus of the book is on the visual medium, but in another way you would be wrong, because the game-able content is both pretty interesting and more prevalent than may be expected. I know that I am happy that I own all three.

Herein, I am focusing on what is game-able, but if you are not spending some time drinking in Doug Kovacs' illustrations, and possibly considering how to turn them into game-able materials, I fear that you are missing the point. Or a point, anyway.

Flipping open the cover, we begin with four new monsters (Red Gowl, Faerie Slug, Beastman Shaman, and Miserable Flamesquat) and a d40 (!) table of "people and folks" - faces drawn by Doug Kovacs. Of the four new monsters, you will probably get the most use of the Beastman Shaman, but the Faerie Slug is my favorite. The Gowls you may be familiar with due to their appearance in the official DCC dice sets.

Page 11 is "50 Things Found in that Bag, Box, or Hole". You'll have to decide what properties they have.

Pages 12-13 comprises the map of "The Spine Wizard's Closet", the seed for as many adventures as there are judges. The illustrations on the map and rooms should inspire many interesting, or perhaps terrifying, encounters.

That's nine pages out of 26, including inside (but not outside) covers. Being Doug Kovacs, though, you should probably include the covers. The point I am trying to make here is that there is an abundance of cool artwork, and that cool artwork is in no way limited to the immediately game-able content.