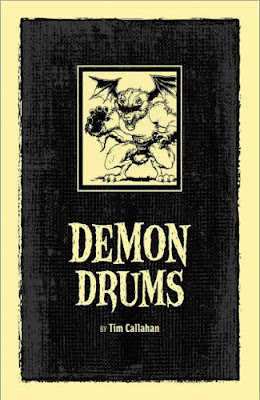 Demon Drums was written by Tim Callahan. Cover art is by Chris Burnham (front) and Fred Dailey (back), with interior art by Fred Dailey, Nick Burchard, and Tim Callahan. It was published by Moon Dice Games. The print version was originally released as a GenCon 2014 exclusive.

It is unfortunate that there is no direct portal to the Crawljammer milieu from this adventure, although, to be honest, I have no idea how one could have been worked into the existing material seamlessly.

Demon Drums has some tenuous thematic similarities to Jobe Bittman's The One Who Watches From Below, which had been published earlier in the same year...enough to spook players who had played The One Who Watches From Below if they also play through this adventure, but not enough to be certain that the similar motifs were intentional. A judge using both modules in the same campaign could definitely have fun linking the two, though.

Strange drumming is heard in the distance. Bizarre creatures battle each other to the death. And what treasures lay beneath the deadly swamp? Will the PCs live long enough to find out?