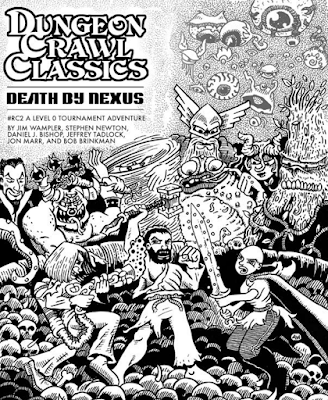 Disclosure: I wrote one section of this adventure, The October Wood.

Death by Nexus is a tournament funnel. This format has been covered by the Spellburn podcast, and is worth listening to before you jump into the fray. Like all tournament adventures, though, it is easy enough to use in your home games. In this case, you may wish to use only one or two sections per funnel, because this is designed to churn through PCs.

The introduction describes how a tournament should be run:

Death by Nexus is a DCC RPG Tournament adventure based on the character funnel format. This adventure is designed for 9 players, with each player having only 1 level-0 PC. As each PC dies, the controlling player taps out of the game, and a new player rotates into the game with a brand new PC. The tournament adventure is scored by ranking individual PCs by largest number of encounters survived. Players eliminated from play may re-enter the game with a new PC when another seat opens up at the table.

The tournament will be played for a pre-designated amount of time. Players are scored in the tournament as follows: For each encounter survived (an encounter being defined as any time in which initiative is rolled to begin a combat), stamp the player’s character sheet once with the “I Survived!” stamp. When a PC dies, likewise stamp that player’s character sheet with the “Dead” stamp. Remind players to hang onto their character sheets for later event scoring. At the end of the event, the players with character sheets that show the most stamps for encounters survived will be ranked, and the top three numerical survival totals will be awarded 1st, 2nd, and 3rd place respectively. Any ties will be settled by a d20 dice-off between the tying players.


Why these stamps are not being sold on the Goodman Games site is beyond me, but if you want to have stamps made for your own use, finding a seller (online or otherwise) should not be too difficult. As a side note, when I had my own stamps made, I went the route of cheaper prices, and failed to realize how small the actual stamp would be. Learn from my mistakes, and get yourself a good-sized, clear stamp. I intend to have new stamps made before GaryCon in 2017.

The adventure is broken down into several sections, each of which represents a "Hyper Arena" (essentially a play area with its own rules) on the Nexus of Planes, where the Prime Ones provide sporting entertainment for gods and patrons alike. Your PCs are that entertainment.

The sections of the adventure are:


This is the second "DCC Cabal" tournament module, organized by Jim Wampler for Goodman Games. As with the previous RC module, The Hypercube of Myt, and the later one, The Shambling Un-Dead, Mr. Wampler contacted a number of writers to create a single part of the adventure. It was a stated goal in this particular case to showcase some of the fun stuff from higher-level play within the 0-level format. I think that all sections accomplish that pretty well.