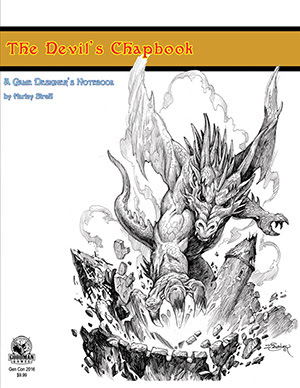 The Devil's Chapbook: A Game Designer's Notebook was written by Harley Stroh. The cover features art by Jeff Easley, and the interior art is by Doug Kovacs. It was published by Goodman Games.

Disclosure: I am mentioned in Harley Stroh's introduction.

When one thinks of Dungeon Crawl Classics, three figures loom large over all others: Harley Stroh, Michael Curtis, and Doug Kovacs. To my mind, their influence is even greater than that of the game's creator, Joseph Goodman, in that they have created between them the look and feel of the majority of official DCC products. I would imagine that Joseph Goodman feels much the same, because he gave each of them a chance to showcase their work in three unique products: The Devil's Chapbook (Harley Stroh), The Drain Chamber (Doug Kovacs), and Scrivener of Strange Wor(l)ds (Michael Curtis). Each may be considered a compilation of fragments, and an insight into works in progress.

The Devil's Chapbook is divided into several sections:

Introduction: City of a Thousand Missed Deadlines: In which Harley Stroh discusses his fabled city of Punjar, its support, and the fact that there is still no official Dungeon Crawl Classics release for the city proper. In this piece, Harley Stroh gives Doug Kovacs credit for curating the city, sharpening and honing the material "like a murderer grinding blades in the dark".

Mockup Intro for DCC RPG Punjar CIty Set (2014): Yes, you read that right. Harley Stroh wrote an introduction for a Punjar boxed set in 2014. With Michael Curtis' DCC Lankhmar coming in early 2017, it seems unlikely at the time of this writing that this introduction will be used anytime soon. Still, if you intend on using Punjar in your home game, or trying to write Punjar material for Goodman Games, it is worthwhile to see where Harley Stroh was going.

Hirelings (2015): "When following a stranger into a black, Chaos-infested hole is a better alternative than going home at night, you might be ready to become an adventurer's hireling." A table with 12 Hireling Qualities is provided. While this material was intended specifically for Punjar, Dungeon Crawl Classics judges may find it useful for any milieu.

Caste (2016): Another Punjar scrap, indicating how people treat you depending upon your relative positions on the social ladder.

In the House of the Rat: A Fragment (2014): Part of an adventure taking place in Punjar...and one which would well be worth completing by an industrious judge. The adventure is clearly influenced by Fritz Leiber's Lankhmar stories, and I could easily see it moved to that setting without any real change. Unfortunately, Harley Stroh's fragment stops at the most interesting part of the adventure....Or perhaps this is fortunate, as the judge will certainly want to continue from here. How will you write the ending? You will also have to go back and fill in three statblocks.

Viking Crawl Classics: There is no date given for this. Who wouldn't want to play vikings in Dungeon Crawl Classics? Harley Stroh grants you the complete write-up of the Ulfberht Sword, "a mythic take on the real blades". These dwarf-made swords grant a unique take on Mighty Deeds of Arms, so that a non-Warrior gains a 1d3 Deed Die to roll on the sword's special table, but a warrior or dwarf uses his normal Deed Die to either roll on the table or, presumable, perform some other Mighty Deed of Arms. "Katanas & Cthulhu" is also mentioned, and this is an idea that should be turned into a real product.

DCC-Punk (2015): Some notes on Cyberpunk Dungeon Crawl Classics, which deals almost exclusively with armor and weapons. The Death & Dismemberment table on page 15 relates to this fragment, but it could be used elsewhere. Ideas for using modern weapons with Dungeon Crawl Classics are always welcome, and I am more than happy to see a "Chainsaw hand" given statistics!

Vinotok (2013): A carousing table based on the experiences of Harley Stroh and Doug Kovacs in Carbondale, Colorado. Some may be wholly false.

The back cover is a map of Punjar, the Tarnished Jewel.