Depths of the Croaking Grotto 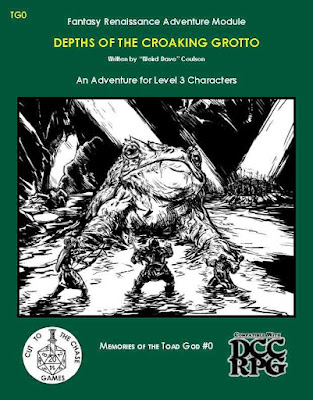 Depths of the Croaking Grotto was written “Weird Dave” Coulson, with art by Matt Morrow, Jeshields, and Gary Dupuis. Cartography is by Dyson Logos, and the publisher is Cut to the Chase Games.

This level 2-3 adventure is converted to Dungeon Crawl Classics, and is simultaneously available for Swords & Wizardry, Pathfinder, Castles & Crusades, and 5th Edition Dungeons & Dragons. It is the first part of the Memories of the Toad God series.

Cut to the Chase's previous series, Wrath of the Kobolds, relied on gnomes without providing a DCC gnome class. This adventure has no such problem. Degenerate toadmen, giant slime toads, and the like are also more "Appendix N"-type material than in the Kobolds series. This adventure could be slotted into the cosmology of The Croaking Fane's spawn of Schaphiroadaz, or it could be tied to Tsathoggua (potentially linking it to The Weird Worm-Ways of Saturn and The Vault of Ash). Ibholtheg the Squamous Toad may well be considered a rival to Bobugbibilz.

The inclusion of the Xilonoc people as ancient (and long-gone) Aztec, Toltec, or Olmec stand-ins is also rather hopeful. The judge willing to do the work could presumably convert The Hidden Shrine of Tomoachan as part of an ongoing Dungeon Crawl Classics campaign linked to this series.

This adventure includes a mix of "old stand-by" monsters, such as a wyvern and manticores, as well as some more "Make Monsters Mysterious" types in the degenerate toadmen and the creatures inhabiting the Croaking Grotto proper. The adventure includes "shadow orcs", which is a nice name, but gives little information as to why they have it.

As with Wrath of the Kobolds, the judge may wish to go over the material carefully, adjusting monsters to make them less predictable and adjusting treasure to be more in line with the standard Dungeon Crawl Classics aesthetic. There should never be a generic +1 sword in a DCC campaign.

On the other hand, if you are looking for something that evokes the feel of the original TSR adventures, while using the Dungeon Crawl Classics rules, this may well be for you.