Tomb of the Ghast Queen 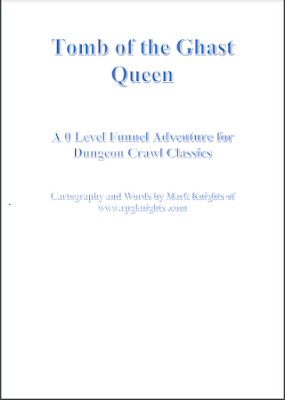 This adventure was originally written as a free adventure for 1st level 5th Edition Dungeons & Dragons characters, which was then turned into a Dungeon Crawl Classics funnel adventure. The author discusses this on his blog. Because both versions of the adventure are free, this is a good opportunity for prospective judges interested in converting materials to DCC to see how another judge approached it.

This is a fairly good adventure, but it is not polished, and the judge is advised to tweak it to their preferences. Some Wizards of the Coast era "D&Disms" remain that I recommend weeding out - the adventure does not need minotaurs to perform a menial task that strong humans might do, for instance.

If I were running this, I would strongly consider creating some alternative exits to the dungeon, to account for the needs of the living creatures found therein. I would also add some material related to these additional exits that are caused by the outside world coming in. I think that would make the environment more dynamic for the players, and give them more to explore. There are also a number of places where I would replace references to the core rulebook with actual stats or spell effects. That would at least make it easier to run at the table!

Also, consider altering starting equipment based on the PCs being prisoners working in a quarry before the adventure starts. No one is likely to have a cow or a pony, or armor or a real weapon, no matter what their occupation is. Whether or not they should even have normal starting funds (5d12 cp) is questionable. On the other hand, it would not be unreasonably for every PC to have either a mining pick or a sledgehammer.

Even with these caveats, though, it is a free adventure, and worth taking a look at!