Theater of the Hammed 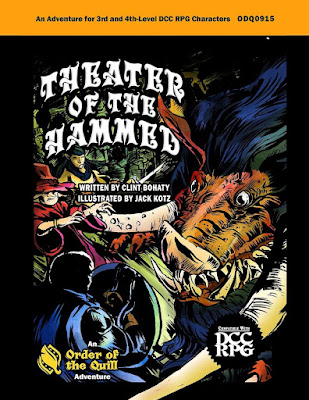 Theater of the Hammed is a 3rd to 4th level adventure written by Clint Bohaty. Art is by Jack Kotz. The publisher is Order of the Quill.

Other adventures may take their place upon the gilded stage, but Theater of the Hammed was the first one written for Dungeon Crawl Classics. It makes use of its setting both in requiring the PCs to collect scattered pages to understand how best to proceed, but also in that the PCs themselves may fall under the potent illusions of the theater, potentially fall deeper under its curse – bolstering both their own strength and their enemies.

The adventure uses a Misbelief Rating to keep track of how far from reality the PCs fall, which can aid both them and their enemies. If they fall too far out of touch with the real world, they are very likely to never emerge (living) into that world again!

Linked to this, and to the ideas of theater and illusion, the adventure plays upon the idea that each character has some form of True Love. The intersection of love, illusion, and fairy tale offer plenty of opportunity for role-playing. Players can keep track of their descent into illusion by using Melodalia's Medallion of Misbelief, which is a physical object that either the judge will have to make ahead of time, or buy from online. You can play the adventure without using these props, but using them is part of the fun.

Content-wise, Theater of the Hammed would make a fine addition to a campaign based on the Faerie Tales From Unlit Shores series. "The Boy in the Golden Pantaloons", the play which sets off the events in the module, may in some ways be liked to Robert W. Chambers' "The King in Yellow", as a play that is existentially dangerous to those who come into contact with it. I would recommend setting up the adventure by alluding to the story earlier in the campaign - even within a funnel, if a PC has an appropriate occupation - so that the players have a frisson of recognition when you run this. As long as you don't go into any details about the story, the adventure will not be damaged.

The adventure was discussed on Episode 55 of the Spellburn podcast. It was also discussed on the Sanctum Secorum podcase on several occasions. As of this writing, there are no reviews on DriveThru RPG, and only one four-star rating, which is rather a shame. That does mean, however, that you can run an adventure that your players are unlikely to have experienced before.

"The people of Minstrel need your help! A divine ritual meant to heal our sleepless king has gone abominably, giving birth to blood-thirsty creatures from the pages of fable! Now we are trapped between both the Western raiders which rule our port, and the nightmarish demons which hold our once great amphitheater. Scattered within the theater are the cursed fable’s pages, which we need to complete the ritual! Where could such a group of adventurers be found, who would dare face creatures and beasts so vile as to even hurl the imaginative minds of a theater audience into abject terror!"

Theater of the Hammed is written to be played by five to seven 3rd-level characters, or four to six 4th-level characters, in approximately six hours of playtime. Because of the dangerous encounters waiting within the amphitheater, it is recommended that the party have both a warrior and dwarf class. Over the course of the adventure, PCs will collect the scattered pages of an enchanted bedtime tale to decipher the weaknesses of their fabled opponents. While exploring the theater, characters will potentially fall deeper under its curse – bolstering both their own strength and their enemies. A new mechanic called the Misbelief Rating (MR) is used to track the players fall from reality. If players fail to manage their MR with vigilance, the adventure may become too much, as the blood-thirsty illusions lurking within complete their passage from the pages of fable into the planes of reality!