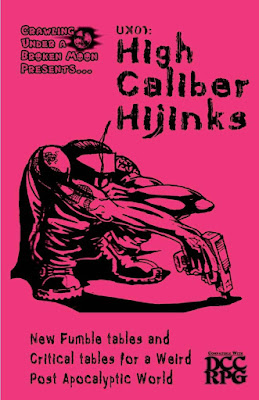 This item is designed for use with Crawling Under a Broken Moon, but could be used with any setting that uses firearms, robots, and/or aliens. Let's look inside.

How to use these tables: A brief note reminding the prospective reader where to find the Critical Hit and Fumble tables in the core rulebook, and that there are firearm and grenade rules in Crawling Under a Broken Moon issues #1 and #2.

Character Crit Table/Die by Class (including CUaBM classes): Exactly what it says on the tin. Charts to tell you what die you are rolling, and what chart you are rolling it on.

Firearms fumble and crit tables: Fumbles range from accidentally flipping the safety on so that your weapon doesn't fumble to shooting yourself for 2 dice of damage and jamming the weapon. Five tables are provided for firearm critical hits, because the wizards in the party are simply not as competent as the warriors and mutants.

Grenade/Thrown bomb fumble and crit tables: I've actually thrown a live grenade in Basic Training. Do not fumble when throwing a live grenade. The best thing that can happen, in these rules, is that you forgot to pull the pin. Presumably, whoever you threw it at now has a usable grenade, and can potentially throw it back. You again get five critical hit tables.

Alien/Weird fumble and crit weapon tables: Because strange items of super-science may react in unpredictable ways. You again get five crit tables.

Crit Table AL: Aliens: From "Strange energy arcs around the wound. The PC suffers +1d8 damage." to "Infected with a virulent xeno-disease! One random stat is lowered by
2d4 points for 2d14 days. Requires a 5 HD healing result to cure." (Actually, to "Roll again three times.", but that only tells you that you need to roll; it doesn't tell you whether or not a "large probe is injected". Yes, aliens actually can, and perhaps will, probe your PCs to death using this supplement!)

Crit Table RO: Robots: Suitably terrifying critical results for robots. Also suitable for use on Drongo, the Purple Planet, or when Frozen in Time.

The point being this: Although the work is written for a specific, post-Apocalyptic genre, there are a lot of ways that any Dungeon Crawl Classics judge might find the work useful.