The Hypercube of Myt 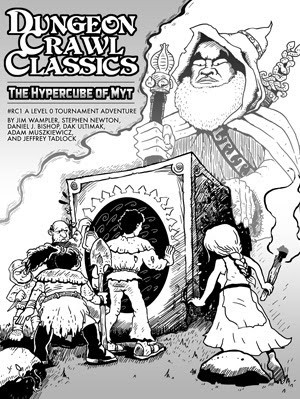 Disclosure: I was one of the authors on this project, having written "The Endless Hallway".

I was lucky enough to be asked to join the "DCC Cabal" of writers to create a tournament funnel for Free RPG Day 2015. Jim Wampler was the project head of all three RC tournament funnel modules, including this one, Death by Nexus, and The Shambling Un-Dead.

If you are unfamiliar with the concept of tournament funnels, you can listen to this Spellburn podcast, or read this article on the Spellburn website.

The sections of this adventure are:


My original idea for the Endless Hallway was that it was the digestive tract of an interplanar creature, and that the doors within it could literally go anywhere if the PCs mastered the Hypercube. This idea was nixed as being both too gross and leading toward split parties, which was deemed undesireable for a tournament funnel. Nonetheless, you can read some ideas that didn't make it into the final project here.

I ran The Hypercube of Myt at Dueling Grounds in Toronto on Free RPG Day 2015. The game was fairly successful, despite occasional blunders and butchering of other author's work. I had obtained gift certificates (at my expense) from the store, so that the winner received a $50 store credit, and the two runners-up received incrementally less. There were many, many dead PCs that day!

The keep of the legendary wizard Mytus the Mad was razed, looted, and ransacked generations before your oldest ancestor was born. The only reason the chaotic sorcerer’s name is still whispered millennia after his death is because of what lies half-buried amid the scattered flagstones of his long-vanished keep: The Hypercube of Myt. This ageless cube is made of adamantite, is covered in filigreed rune circles, and even at a mere 10’ square is preternaturally heavy and cannot be moved. Centuries of tampering with the Cube have proven it to be too resistant to time’s travails or man’s meager efforts to be damaged or otherwise harmed.

Each year on the vernal equinox, the southern entrance unlocks itself from sundown to sunrise. And this is precisely why you are here now, at the annual Festival of the Fatted Calf. The festival is famous for drawing the curious, the foolhardy, and the uncautious from far and wide to ponder the mysteries of the Cube.

As the more sensible denizens of your village have begun to stagger home, you and your friends continue drinking grog-laced ale and speculating on the nature and contents of the immutable Cube. Is it a treasure vault guarded by extra-planar forces, or perhaps a gateway to another time and place? And with that, the first of you slams down your wooden mug and declares lustily, “I’m going in!” Not to be shamed by one so obviously dimwitted and undeserving, you too stand and prepare to enter the Cube.

Soon, there is a unruly drunken mob of you ready to leave your dull and dreary lives as dirt farmers and hemp weavers in exchange for a chance at immortality and glory. The first eight of you rush to the vine-tangled entrance of the Hypercube of Myt and enter, with more sure to follow behind you.

The Cube has two one-way doors on opposite sides: an entrance that becomes unlocked once each year, and the other which is believed to be an exit, though no one in living memory has ever exited the cube. Above the entrance, for those who can read the spiraling script of the ancient Kingdom of Morr, is an inscription that reads, “Whosever may be worthy, can become me.” Riches and power beyond measure are said to lie inside for the taking, if one can but enter, traverse to the other side, and exit the Cube of Myt.