Intrigue at the Court of Chaos 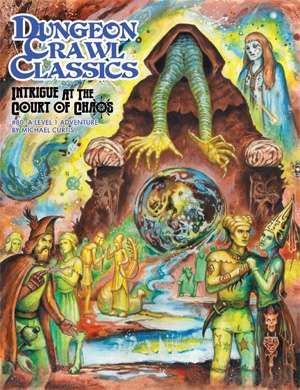 DCC #80: Intrigue at the Court of Chaos is a level 1 adventure written by Michael Curtis. Art is by Doug Kovacs (also cover and maps), Jim Holloway, and Stefan Poag. The publisher is Goodman Games.

This adventure is almost impossible to discuss properly without giving too much away. The adventure itself is conceptually quite simple, but it is written in a way that will encourage truly memorable play one the players add their own complexities. And it is almost inevitable that they will.

The very concept of this adventure is something that, in another system, might have occurred near the end of a party's adventuring career. Not here. Michael Curtis drops newly-minted PCs, fresh out of the funnel, into the very center of the conflict between Law and Chaos.

If you are planning to run this adventure as part of a campaign, the Yokeless Egg may be linked to the Egg of Creation in The Falcate Idol. There are also a number of entities in this adventure which would make excellent patrons, and the adventure gives PCs reason to consider that possibility. It would be very cool to see these written up, possibly in an expanded version of Intrigue at the Court of Chaos, or possible elsewhere (The long-awaited Annual? A Gen Con program guide?).

At the mercy of Chaos! Abducted by the Court of Chaos, the adventurers face hard choices if they want to return home. The Host of Chaos desires a legendary artifact held by the Scions of Law and need pawns to retrieve it. Faced with an eternity of servitude, the party must sneak into the Plane of Law and steal the Yokeless Egg from under its guardians’ watch. But not all is what it appears when the Court of Chaos is concerned and serving the Host may destroy the party from within. Can they survive the Intrigue At the Court of Chaos?