The Haunting of Larvik Island 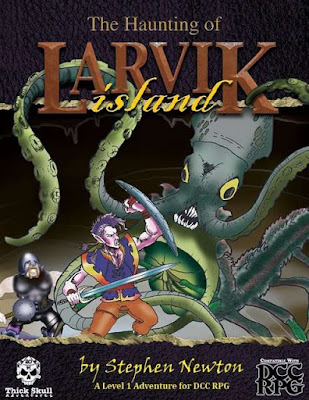 The Haunting of Larvik Island is a 1st level adventure by Stephen Newton. Artwork is by Antoni Layos Tira (who also did cartography), Catherine DiNardo, and Jeffrey Tadlock. The publisher is Thick Skull Adventures.

Disclosure: I am credited, along with others, for "Editing, Proofreading, Suggestions and Helpful Eyes".

I cut my teeth on Holmes Basic, and it wasn't long before I had a pretty impressive collection of modules, including X1 The Isle of Dread, by Jeff Dee. I ran this using a mishmash of 1st Edition Advanced Dungeons & Dragons and house rules culled from Holmes Basic. And it was glorious.

There is something profoundly satisfying about island settings for adventure. In part, it may be knowing that you are cut off from the rest of the world. In part, it may be that you know everything you encounter there has likewise been isolated. The setting is open-ended, yet finite. This means that it has many of the strengths offered by a dungeon setting without the obvious limitations on direction.

It should come to no surprise, then, that I quite like The Haunting of Larvik Island, which not only offers an interesting island setting, but factions to oppose your PCs, a small ruined settlement to explore, a giant albatross or two, a mystery to solve, and a very cool cave system/dungeon to defeat.

In fact, this adventure is good enough that I once listed it as #11 on a list of the (then) Top 15 DCC Adventures. In that review I said:


This isn't just a dungeon plopped in the middle of a wilderness, this is a wilderness that sets the stage for the climactic dungeon. And the dungeon is cool. There is a giant albatross. There is a puzzle to figure out. There are un-dead, goblins, and ruffians. In a way, the adventure is Treasure Island meets Dungeons & Dragons meets Conan the Barbarian. There is something about the set-up, and the pay-off of the adventure that makes me imagine Conan involved in the escapades. Perhaps it is because there are things to talk to, someone to protect, a treasure to be lost or won, and plenty of things to kill. And at least one encounter that would make the burliest barbarian mutter "Crom!" when he faced it.

That is not to say that there are not downsides to the adventure. The first is that the tone and style of the player handouts seems uneven to me. But there are a reasonable number of handouts, and that is really a matter of taste more than substance. The second is that, although the adventure ends in a sort of cliffhanger, ready to leap to the Kaimai Islands, no further adventures in the Princes of Kaimai series has yet been produced.

Get It Here!
Posted by ravencrowking at 12:03