Jewels of the Carnifex 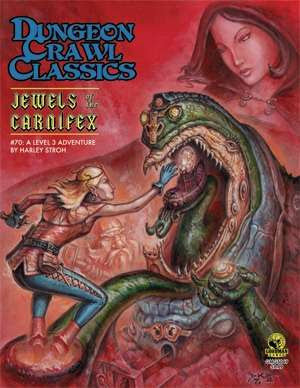 DCC #70 Jewels of the Carnifex is a 3rd level adventure by Harley Stroh. Art is by Doug Kovacs (also cover and cartography), Jeff Easley, Jim Holloway, Russ Nicholson, and Stefan Poag. The publisher is Goodman Games.

At the end of a forgotten back alley, in the weird and otherworldly marketplace of faiths known as the Bazaar of the Gods, stand the ruins of a forgotten chapel. All that remains are a fallen staircase, a mound of toppled stones, and a sickly, leafless tree placed squarely in the center of the ruins.

If you were uncertain that Harley Stroh's Punjar, the City of a Thousand Gates, is at least partially modeled off of Fritz Leiber's Lankhmar, the above paragraph should answer all doubts. Although this adventure is nominally set in Punjar, it is easily transplanted to any Dungeon Crawl Classics milieu. When I ran the adventure, I set the action in Denethix, the main city of Patrick Wetmore's excellent Anomalous Subsurface Environment (written for Labyrinth Lord, but easily converted).

Within this adventure, the PCs explore the ruins of a chthonic cult's temple, which is not completely abandoned, seeking the fabled and titular Jewels of the Carnifex. The Carnifex herself may be encountered, and, while the upcoming expansion, Lost in the Briars by Brendan LaSalle, is something to look forward to, a full patron write-up for the Carnifex would be rather keen.

The adventure was fun and challenging, and the mutated spider-thing in the outer sewer region worked extremely well in conjunction with Denethix's somewhat polluted waterways. The frog demon also worked extremely well, and it is only by dint of Mighty Deed and burnt Luck that the party cleric was not lost forever in the sewers beneath the city. Luthold the Mad was great fun to play, and dealing with Azazel and the Pious was interesting all around. The entire set-up could not help but create a dynamic, ever-shifting play experience.

My players also ran afoul of the descendants of the Swords of the Pious, who still watch over the ruins of the Carnifex's temple. This was another nice touch to the module, and again brought to mind the City of a Thousand Smokes.

Set amid the sprawling decadence of Punjar, Jewels of the Carnifex offers low-level adventurers a chance to plumb the mysteries beneath the city’s soiled streets, explore forgotten crypts lavished with weird artifacts, and – for the quick and daring – claim the lost Jewels of the Carnifex!