Crawling Under a Broken Moon #10 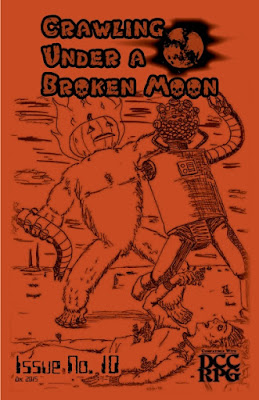 No monster book is every completely useless to judges using a different setting, and this is no exception. There is always something that you can convert, or reskin, to fit your exact needs.

Yet this collection not only fits the Umerican setting of Crawling Under a Broken Moon, but it shows the variety of post-Apocalyptic worlds enfolded into the setting.

In this issue you get:

In essence, Battle Cat from Masters of the Universe, harkening back to Issue #5 (where it actually appears on the cover). You need to bond with an Aetherian War Cat; it will not let just any warrior hop on its back and ride it. This creature's write-up makes use of Mighty Deeds from Steel and Fury, published by Purple Duck Games, a move I strongly support. Referencing other authors, or using their Open Gaming Content, helps create hooks and links between material that the clever judge can capitalize on.

Highly intelligent parasites that creep inside you in the outhouse. Shades, perhaps, of Stephen King's Dreamcatcher.

This creature, by Kevin Searle, is a natural for the ruined urban environment - giants that appear to be made of concrete and asphalt. Of course, some of them are cyborgs.

Author Ryan Moore give us robots created to fight the wars of the Ancients. These huge (think jumbo jet) constructs roam around capturing prisoners or killing folks according to their programming, unless they are being used as a mobile base for a cybersorcerer. Their captives are not safe - there is a d6 chart for what happens when the holding cells are full. Most of the results are quite unpleasant; two of them only moderately so.

What is worse than an owlbear? A flying bear with optical lasers, of course! But there is a chance you can domesticate the cubs, so.....

My favorite creature in this issue, the Fruiti-Slush ooze is both hilariously funny and frighteningly able to dispatch careless PCs.

"In the ruins of just about every city yet standing there are small buildings with faded posters touting that delicious frozen fruity beverages are available inside. The citizens of the old world must have been obsessed with them considering how many different types and flavors seemed to be offered.

"Why these particular beverages were awakened by the multi-dimensional cataclysm that nearly destroyed the planet no one can say. All that is known is that they now have animated into acellular masses of creeping frozen protoplasm that hungers for the moisture of living beings. The rustling whisper of their icy crystalline texture and an unnatural, fruit scented chill in the air are the only warnings that one of these horrors is near."

Orangutans with jack-o-lantern heads that fling flaming poop. They guard areas claimed by Grokk, the "god of the twisted Wilds and Wastes". Should you attempt to reclaim these areas for civilization, you may encounter their unnerving chatter or insidious sabotage.

These un-dead cybernetic unicorns use nano-necrotech to turn innocent maidens into the un-dead "Wight Ladies" that serve them.

An alien race of master manipulators which are, thankfully, not just another take on the Beholder from Dungeons & Dragons. This is a creature which might employ PCs, might oppose them, or might be the buyer for their ill-gotten goods. It is difficult not to be charmed by their presence.

Here the issue delves into serious horror with the Harpoonnik and the Scorpain, twisted horrors that belong to the dystopian futures of films like Devil's Pass and writers like Clive Barker. You could use the provided examples to create a truly creepy adventure...but you are welcome to create more.

Alien cybernetic six-legged dino-centaurs. They are always encountered on a mission, most of which promote conflict with the locals. These missions apparently replace the "Adventure Hooks" for this creature, as this is the only creature listed without an "Adventure Hooks" section. On the other hand, they are armed with some neat weapons. Your PCs may end up with some of these, if they are lucky.

Want a little kaiju action with your post-Apocalyptic fantasy? Here you go. Using the "Gifts of the Glow" table and a little imagination, the prospective judge can have their very own Cloverfield or Godzilla.

A twisted parody of the Smurfs. Getting the joke won't help you deal with them. There are rewards for capturing them, or obtaining samples of the berries and fungi they grow, though, so....