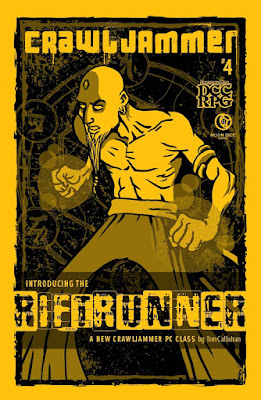 Crawljammer #4 was written by Tim Callahan and Sean Ellis, and published by Moon Dice Games. It contains:

A Brief Note on Crawljammer Metaphysics

Tim Callahan offers some brief notes on the creation mythology of the Crawljammer setting.

Elysia: Land of the Space Elves

Author Sean Ellis describes Elysia, a sort of pocket dimension where Crawljammer elves rule. There are rules for what happens should you try to enter the portal to this version of Elfland, and a brief discussion of adventure opportunities.

The Riftrunner: A New Character Class

This is a rather interesting class provided by Tim Callahan, and another one from the Crawljammer
milieu that might easily fit into other Dungeon Crawl Classics campaigns. Essentially, a riftrunner has the ability to step out of reality, teleporting in a limited way at low levels, and then casting a form of planer step at mid- to high-levels. They have a special form of spellcasting, and they can make "phlogiston fist" attacks, giving them extra damage for unarmed combat.

Perhaps my capsule description doesn't do the class justice. It appears to be well designed ("balanced" if you will, so as not to steal another class' schtick), and it looks like it would be fun to play. I have yet to see a riftrunner in play, though.

Riftrunners have six "domains", based on alignment, and Tim Callahan describes them here. Each time a riftrunner attempts to manifest a spell in a given domain, he rolls 1d10 to determine which manifestation is triggered. A roll of "1" is "phlogiston feedback", which isn't desirable. Phlogiston feedback isn't as long-lasting as corruption or patron taint, but it will happen twice as often.

Space Pirates from Beyond the Grave

Finally, the issue is rounded off with another Tim Callahan adventure, this one featuring un-dead space pirates. And an auction. And a nightclub.
Posted by ravencrowking at 12:47