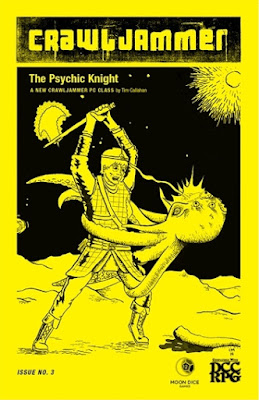 Crawljammer #3 was written by Tim Callahan, Sean Ellis, Lauren Callahan, and Mark Malone. It was published by Moon Dice Games. Let's take a look inside.

The Secret History of the Perilous League

Space is vast. Even when the judge narrows play to a single solar system, we are talking about omets, asteroids, nine planets (Pluto is a planet, not a dwarf planet, in Crawljammer, as in the pulps that inspired it), and over 170 moons. The area between these objects is even greater. If you think detailing a barony or a continent is hard, imagine the amount of prep work an entire solar system would take, if that is what you had to do.

Science fiction role-playing games have dealt with this issue since Traveller hit the market, and there are various approaches one can take. All of them seem to boil down to two possibilities: Use random tables to quickly devise data, or use some means to tell the players where the action is. Most games, if not all, use both methods, and the Crawljammer setting is no different.

There is also some ambiguity about the Perilous League's history and ultimate goals, which means that the judge has a great deal of leeway in how they present the material. Although it is not explicit in the text, it is conceivable that in some cases, your PCs may even oppose the League! Perhaps they really are a force for good. Perhaps, ultimately, all they really want is the return of Cthulhu and the Great Old Ones.

When I wrote The Vault of Ash for Moon Dice Games, the Martian Skeleton Man psionics are a modified version of the rules found herein. Mind Games, by Shield of Faith Studios, offers an alternate psionics system (which is more complex), and additional psionics rules can be found in Drongo: Ruins of the Witch Kingdoms by Leviathan Publishing and The Wizardarium of Calabraxis published by Kill It With Fire). If you are looking for a simple system, with a class that can easily be fit into any flavor of Dungeon Crawl Classics, this is it.

If you are looking for something more complex, Sean Ellis provides advanced psionics rules as well as the the B’rabo Jast, oro “Blubber Uglies” which devour brains. These rules mesh well with the Psychic Knight class, and I see no reason why a Dungeon Crawl Classics milieu (Crawljammer or otherwise) could not have multiple psionics systems operating within it.

Random tables are great for inspiration, and this one by Lauren Callahan allows you to create random items that might be encountered in an adventure. The table uses 1d12 with four columns, but only one column determines effects, so the prospective judge will want to take this table as a good start and add more rows up the Dice Chain.

"In ancient times deep within the nine rings of Ouranos, the void wizards in their aethereal towers initiated pacts with a cosmic intelligence. The godless rituals they performed resulted in a transmutation of this element of chaos to a substance that could be harnessed. Solve et coagula. With this knowledge these alchemical sorcerers devised weapons of unimaginable power. One such device, the Promethean Lance, treasured by kings immemorial, was a weapon of chaotic phlogiston energy."

Mark Malone describes a powerful, but unpredictable, weapon for your Crawljammer adventures.

The issue is rounded off with an adventure that follows directly from Red Planet Rendezvous: The Arcadian in Issue #2. Once again, Tim Callahan demonstrates a commanding knowledge of the space fantasy genre, particularly as pertains to Appendix N fiction and the early pulps.
Posted by ravencrowking at 08:51