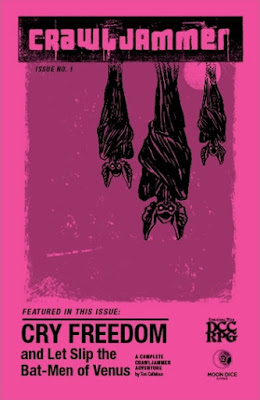 Crawljammer #1 was written by Tim Callahan and Andrew Callahan, and was published by Moon Dice Games. Although clearly inspired by the 2nd Edition Advanced Dungeons & Dragons Spelljammer setting, Crawljammer is its own thing, and is influenced by the planetary romances of Appendix N. As the author puts it:

"If THUNDARR THE BARBARIAN and IRON MAIDEN had a baby and that baby were an RPG zine inspired by Edgar Rice Burroughs using DCC rules, that baby might be called CRAWLJAMMER and it would be destined to split the moon in half with its wail of glory."

Let's see what this issue contains.

Adventuring in Outer Space and on Alien Planets

Tim Callahan describes the basics of the Crawljammer setting, including rules for space travel, ship-to-ship combat, and alien planets. Table 1.2 ("What Makes This Planet Different?") allows the judge to make planets unique without requiring loads of extra rules or fiddly bits to keep track of. There are only eight entries on the table, but the clever judge can use them as inspiration to create dozens of unique worlds.

Author Tim Callahan describes the various types of space-faring vessels in the Crawljammer setting. Eight specific examples are given. This is more than enough for a judge to start a Crawljammer campaign. One of the examples, the Void Ziggurat, is a mobile adventure location.

The Crawljammer setting makes use of a science-fantasy version of our own solar system. Tim Callahan provides an overview here. The write-ups demonstrate a real understanding of the pulps, not limited to Appendix N, and small references are made that should bring a smile to the judge's face.

There is an implication that the Crawljammer cosmology extends beyond our own system (the Earth "known throughout the galaxy for its abundant natural resources and its sometimes-overly-passive, sometime-overly-violent inhabitants who tend to stumble into situations well beyond their understanding"), but nothing set in stone. One gets the impression that some aliens find it easier to travel to Sol than we do to travel to, say, Alpha Centauri.

"No known voyager has traveled beyond our own solar system aboard a spacecraft or flying vessel, but legends describe dimensional doors and lightspeed teleportation to other realms far beyond even the distant planet of Pluto. Those are rare exceptions and most planetary travel occurs between the
celestial bodies in our solar system."

This keeps a tight focus on the planets, asteroids, and moons of our system, while allowing the judge to set special adventures on other worlds orbiting distant suns.

This is a new character class, by Tim Callahan, for lizardmen from various planets.

Author Andrew Callahan supplies Table 1.3, so that your newly created lizardman can have an occupation, just like everyone else. Twelve occupations are given.

Cry Freedom and Let Slip the Bat-Men of Venus

Finally, Tim Callahan offers an excellent 1st level adventure, which made my short list for the 15 Must-Have DCC adventures at the time it came out, although it failed to make the final cut. This failure is not at all a criticism of the adventure, but a testament to how many great adventures had already appeared for Dungeon Crawl Classics at that time.

This adventure takes place on Venus, and is to the best of my knowledge the first extra-planetary adventure published for Dungeon Crawl Classics. Adventures such as Peril on the Purple Planet or my own The Dread God Al-Khazadar are descendants of Tim Callahan's genius. The adventure itself is pure Edgar Rice Burroughs in its themes and execution. Kudos!
Posted by ravencrowking at 07:40