Crawling Under a Broken Moon #15 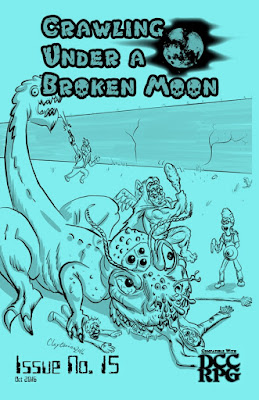 Crawling Under a Broken Moon #15 was written by Reid San Filippo and Jon Carnes, and published by Shield of Faith Studios. This issue is the second part of the Dinotastic Park semi-hex crawl begun in Issue #14.

Disclaimer: I received a free review copy of the pdf for this issue. Of course, I then bought the paper copy as well.

Mentioned several times in the first part of the semi-hex crawl, this is a company of thugs which is working toward becoming "a halfway legitimate paramilitary group" within the adventure setting. They control the Free Trader's Rest, a shanty town that the PCs will probably encounter at some point. The shanty town is outside the dome surrounding Dinotastic Park, and the Red Claw Raiders maintain a sort of monopoly on access to the dome.

Other Ways to Enter the Dome

With the grudging blessing of the Red Claw Raiders or not, the PCs need some way to access the dome before they can explore the park. Of course, they can always use the gates described in Issue #14.

There is a large lake nearly bisecting the park. Characters will probably want to cross it. There are several possible ways to do so, but all of them have their downsides.

The Western Half of the Park

This article includes a breakdown of the major inhabitants of the western side of Dinotastic Park, as well as some random encounters.

Descriptions of major features of the western half of Dinotastic Park, including the MechaTemple of the Ultimospark, the Red Claw Basecamp, and the Tilted Towers of the Once-men.

Robotic priests ordained by the Ultimospark, capable of converting hostile AIs. Naturally, this class includes a description of the Ultimospark, the "Manifold Entity of Artificial Perfection". A patron write-up is not included.

I really like the idea of special classes being "unlocked" for players through the agency of playing through specific adventures, or exploring special areas. Between these classes, and the Saurian classes of Issue #14, there will be a real difference between Crawling Under a Broken Moon campaigns where Dinotastic Park is explored or not. To my mind, this really speaks to the "Quest for It" ethos of Dungeon Crawl Classics.

This issue brings us the Bumpkinoids (alien rednecks), five more Purebreed Dinosaurs (two of which are technically marine reptiles), the Mecha Megasaurus (exactly what it sounds like, only bigger), the Robo-Faithful (dedicated to the Ultimospark), the Tortoise Guardian (which is a great creation!), the Wise-Eyes (powerful Once-men psychics), and Empty-Ones (Cro-Mentalists who have lost "their morality, sense of community, and empathic connection to any other living thing" after being seduced by inhuman things in the depths of the Universal Metaconsciousness.

If you think that's a lot to fit into a single issue, you are right! But none of it is given short shrift or feels cramped.
Posted by ravencrowking at 09:47