Crawling Under a Broken Moon #18 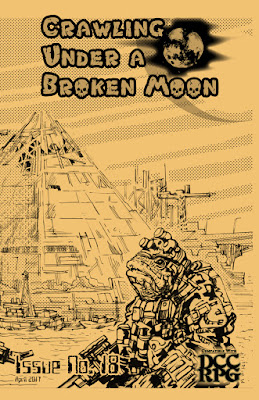 An Interesting Place to Die: The Menfish Pyramid of the Bass Masters!: This article, by Reid San Filippo and Bob Brinkman, described the titular Pyramid as well as other points of interest along the mighty Misshippy river. If possible, this setting actually outshines Umerican Seattle, described in the previous issue. It is certainly its equal. Crawling Under a Broken Moon just keeps getting better and better.

One of the really nice things about this Interesting Place to Die, as with Seattle, is that the actors are all believably motivated and conflicted with each other. While some possible jobs are supplied as hooks for the PCs, there are no real "good guys" or "bad guys" here. Any one of these people could exist in real life, if he weren't a fishman or a raccoon-man. The result is that there is a plethora of things to do, and the material in the article could provide shifting alliances, or even be backdrop to another threat.

This is material that you can come back to again and again, making it well worth the purchase price, even if the issue ended here. But it doesn't.

Hybrid Character Class: Author Talon Waite supplies a "new alluring character class to get hooked on". Fishmen always seem to want to mate with humans (see H.P. Lovecraft's The Shadow Over Innsmouth, or my own The Portsmouth Mermaid). In Umerica, as shown in the previous articles, the Bass Masters have found a different way to go about it. The Hybrid is the result of such a union.

Not only is this a playable class, but it is one that has a niche that is, so far, unique: aquatic fish person who is unnaturally beautiful and who can release concentrated pheromones three times a day. This class could easily appear in almost any flavor of Dungeon Crawl Classics milieu.

Blood Dimmed Tides: These are rules for combat in water deeper than knee-high, including new equipment, by Talon Waite. Again, this is usable in nearly any milieu.

The Old Mutant and the Sea: These "New vehicle rules for watercraft to ride the toxic waves" do for aquatic craft what Issue #6 did for ground vehicles and Issue #7 did for air vehicles, planes, and mobile suits.

Twisted Menagerie: If you are going to hang around the Misshippy, you might run into some strange beings. In this case, Crawling Under a Broken Moon supplies you with:


All of these monsters are as usable in almost any Dungeon Crawl Classics milieu, so long as there is sufficient water for them to appear.

Once more, Crawling Under a Broken Moon knocks it out of the park!