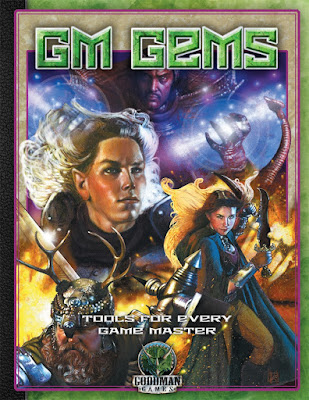 Disclosure: I did the Dungeon Crawl Classics rules conversion on this project.

This is a good-sized hardcover book with a lot of material in it. Because the book is intended to be mostly system-neutral, there was a lot of content which did not need conversion at all. Some things required fairly heavy work because of the difference in assumptions between 3rd Edition Dungeons & Dragons (which the 1st printing of GM Gems used as its default) and Dungeon Crawl Classics.

Chapter One: The Urban Experience

Chapter Two: Getting There is Half the Fun

Even the most creative among us benefit from the creativity of others. Overall, this volume is an excellent resource, which I am happy to have on my gaming shelf, along with 50 Fantastic Functions for the D50, The Dungeon Alphabet, The Monster Alphabet, and the Random Esoteric Creature Generator.