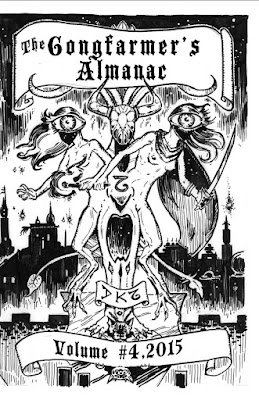 Although listed as "Volume 4 of Five Booklets", there are actually six volumes in the 2015 release of The Gongfarmer's Almanac. Let's take a look inside.

Black Blood Pass - A Mini-Gazetteer: This article, by Roy Snyder (thanks given to Kevin Wojciechowski, and dedicated to the memory of Erick Wujcik) is the framework for a mini-campaign setting, complete with 16 possible "Tales of Concern" and statistics for some of the "Denizens of Caution" you may encounter there. This would fit very well into many campaign milieus, but it is a place wise PCs will soon vacate!

Chirumancy: This article, by James MacGeorge, describes Chirurgeons who practise Chirumancy.  "Their methods are terrifying - wounds sealed with carcinomas, lost limbs replaced with the spare parts from corpses, with no guarantee that the donor was willing, or even human. Their patients will be healed, but over time, they become unrecognizable." Although described in the Table of Contents as an "NPC Class", no class is described. Merely the effects of their work.

Crawling Castle of Grumblethorn and Other Architectural Horrors: Tim Callahan takes a step away from Crawljammer, and provides tables to help the harried judge create non-traditional locations to terrorize players and their characters. Of course, you can use them with Crawljammer, too.

Killtackleball: "Each year on the high desert plains of Urearth, the Centaurs pause in their ever-war with the savage Vulturemen and meet at the sacred oasis to sing of their victories, mourn their lost companions, and clash in the ancient game of 'Bolo'. This is the origin of Killtackleball, a sport of prowess, determination, and luck, often with dangerous results." Author Marc Bruner provides "DCC Rules for Pell-Mell Teamball Sports". Acknowledgements are given to Tim Callahan for the name and the Metal Gods (of Ur-Hadad) for the d11.

Mighty Deeds of Arms - Spear: This article, by R.S. Tilton, is described as an "excerpt from the upcoming Clearspring Gazette". It is exactly what it says on the tin, with three tables: one for the spear, one for the thrown spear, and one for the harpoon.

Tales of Travels, Trials & Chance Meetings: Author Kane Cathain offers rules intended to offer some context for what occurs between sessions. Each player rolls on two tables, and then weaves a story around the result. The judge then offers one boon and one detriment to each player, based off of the stories. An interesting concept.