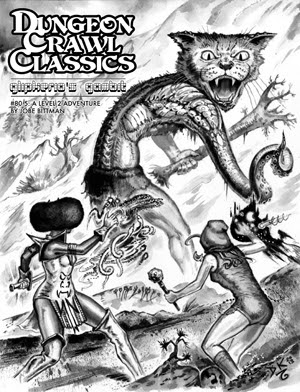 DCC #80.5: Glipkerio's Gambit is a 2nd level adventure by Jobe Bittman, with illustrations and cartography by Doug Kovacs, and published by Goodman Games.

This adventure, which is also part of the compilation module, Chaos Rising,

This is a fairly linear adventure, although the major plot point of the scenario requires it to be. Players still have plenty of important choices when determining how they approach the material. Although many of these choices revolve around resolving combat with foes, there is also opportunity for puzzle-solving.

The titular wizard is named after the Overlord of Lankhmar, Glipkerio Kistomerces, The action revolves around that wizard's attempt to corrupt the Temple of the Three Fates on Mount Tyche, with the PCs acting as the agents of the Three Fates. Glipkerio is, of course, aided by his own patron. Together, these things give the adventure a strong Fritz Leiber vibe, and the scenario could easily be fit into a DCC Lankhmar campaign.

The adventure is particularly appropriate for convention play, where a clear goal that can be met within a set time-frame is desirable.