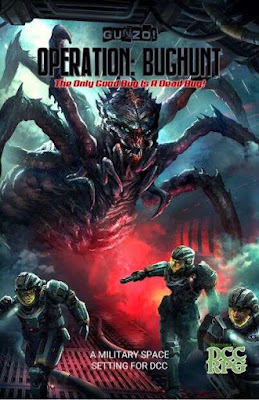 Disclosure: I backed the Stars Without Number revised edition Kickstarter, where the majority of the art in Operation Bughunt comes from. A thank you message to the backers appears in this product.

If you are a fan of Starship Troopers or Aliens, this publication will allow you to run your PCs through similar adventures using the Dungeon Crawl Classics rules.

The author says: "The action is these gaming sessions should be cranked to 11, the lethality high, and the ass kicking higher! Have fun and don’t take this one too serious. It’s meant to be crazy, over the top and awesome. Reward creative play (I recommend additional Luck but you do you) and encourage the players to go big, take risks and drive it like it were on rails. But above all else, just have fun!"

So let's look inside and see what we get!

Combat Medic: Similar to the cleric or the Healer (in Mutant Crawl Classics), the Combat Medic is a class designed to patch you up and get you back onto the battlefield.

Engineer: What it sounds like - the person who keeps your armor and weapons working, and might be able to figure out what that piece of alien tech does. There is an unfortunate minor error in this class's Hit Points entry - the hit points listed are for the Engineer, not the Combat Medic!

Pilot: This character gets you from one place to another.

Robot: For other takes on a robot (or similar) class, see Phatasmagoria #1, Hubris, Meanderings #2, and The Umerican Survival Guide. There are many takes on robots in science fiction/fantasy literature and film, and there is no reason why you cannot mix and match various robot classes.

Rank and Advancement: An important consideration for a military-based game, because this isn't a democracy. If you are a robot, not only do you have no cash, but you are sub-human. This is very much in keeping with the dystopian alien-hunting literature. Your rank also determines your monthly pay scale. Robots might be tough, but socially? They are chattel.

Equipment Section: Provides rules for armor, weapons, and other items.

Pressure & Shell Shock: This is actually pretty innovative for DCC, providing a system for tracking the mental trauma that your PCs experience watching their friends die or from suffering horrible injuries. You can relieve Pressure with quiet downtime, but judges who want to simulate the world of the Alien movie franchise or similar dystopian futures could include drugs or other vices with a similar effect. You could even include things like addiction and other downsides, and the need to relieve Pressure might still get your PCs to experiment.

Random Bug Generation Tables: If you want to fight bugs, you need bugs to fight. Consider using the giant insect tables in the DCC Annual and the random aliens from Drongo: Ruins of the Witch Kingdom along with the tables herein.

Although the product assumes that you are running an Operation: Bughunt game, these tables are perfectly usable in any flavor of Dungeon Crawl Classics. As a side note, you can consider using Operation: Bughunt as an exotic location your PCs might arrive in when they traverse a mystical portal or botch a planar step.

Other Alien Enemies: Three more aliens. Two are a base type and master. Both have acidic blood. The third is an intergalactic hunter with the ability to turn invisible to hunt. Draw your own conclusions!

Goddammit! I hate going in hot. My ejector pod is too small, my armor is too big, and this new Cybo-leg is zapping me every couple of minutes. Doc says I’ll get used to it but I dunno.

This makes jump number three in as many weeks. The frequency of hard action has really ratcheted up lately. I’m exhausted. The squad is so bruised and banged up they look more like rag tag mercs than trained veteran marines. We still haven’t had a moment to mourn the fallen including General Smoothers. She was the best! As a General, she had no business being on planet with us losers. She should’ve been up in the command deck with the pilots! But that was never her style. She wasn’t content to fight from space. She was one of us; Infantry. She liked to get her hands dirty. She had to see the bugs and Arachnoids up close and then blast them back to whatever Hell they crawled from.

Things are really starting to cook in here. Must be breaking through the atmosphere. Won’t be long now. Today’s mission, a simple seek and destroy. The local population on Nivay 5 has decided to cut ties with Command and severed all communications. Intelligence shows a new large bug-hole recently burrowed. Our job today, land and disable the capital city on Nivay, causing as much destruction and disruption as possible, then high-tail it back to space before the bugs have a chance to figure out what’s going on.

Do I feel bad for the local population of Nivay? Hell no! Any friend of a bug is an enemy of mine! The entire galaxy is at war, in the fight for its life. You pick your side and you do your part. They choose the wrong side. Period. The end.

Get It Here!
Posted by ravencrowking at 17:16