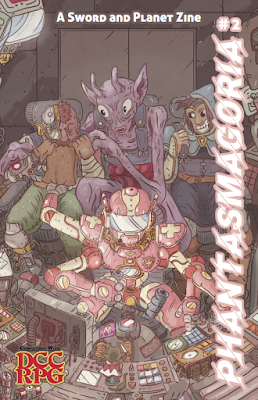 Disclosure: I backed the successful Kickstarter for Phantasmagoria #1.

Even more than the first issue, Phantasmagoria #2 offers material that is useful to any Dungeon Crawl Classics game grounded even tangentially in the science fiction genres. I would go so far as to say that this issue offers some useful tables for any OSR - and even many non-OSR - sci fi/science fantasy games.

So let's look inside and see what there is.

Spaceship Combat: Where the first issue helped you create a wide range of ship types in four pages, this issue gives you a combat system in five.

D30 Artifacts: 30 items that can drive an adventure, be encountered during an adventure, or perhaps be the treasure for success in the adventure. Or all three at once.

Alien Poisons: Six toxins for use in your science fantasy game, including one (data sludge) that can affect automatons.

Prosthetics: From the banal (peg leg, hook) to the extreme (hard light replacement, clockwork limb, full body transplant), this is going to give you options when you inevitably suffer some critical hit that leaves you a body part short.

Magical Prosthetics: Introducing the level 2 wizard spell, Eldritch Limb, that is no more reliable than any other DCC spell...and can produce fantastic results with a good roll, as with any other DCC spell. This spell might be useful in any Dungeon Crawl Classics setting.

Stellar System Generation: If you are going star-hopping, you need to generate systems to hop to. This does a pretty good job of differentiating worlds. If you want a bit more sci fi and detail in your worlds-building, I recommend using the World Tags system in Kevin Crawford's Stars Without Number in addition to the nine tables here. There is even a free version.

Monster Generator: Taking into account both using an existing monster and adding "a bit of science flair to it", and creating new monsters from whole cloth, this article is a good companion piece to the alien creation rules in Drongo: Ruins of the Witch Kingdom.

1d20 Ways to Get Around: Includes entries like "Ziplines between different levels of a city; the higher the level, the wealthier and it only costs money to ascend" and "Rocket shoes that propel you across slick metal tracks". Very fun, with both fantasy and science fiction ideas included.

Additionally, this issue contains rules for incorporating prosthetics into your game, a new spell to regrow limbs, and more useful tables!

It is recommended that this issue is used in conjunction with either Phantasmagoria #1 or your science fantasy setting of choice.