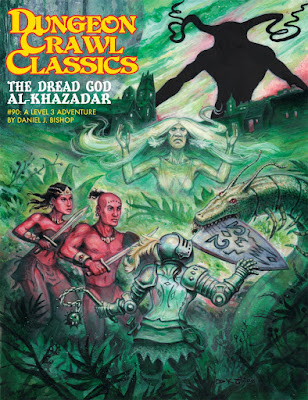 First off, I cannot tell you what an amazing feeling it is to get to see an adventure with your name on it published as a stand-alone product by Goodman Games. The artwork is amazing, and Mark Allen did a fantastic job turning my chicken-scratch maps (especially the outdoor one!) into something presentable!

If you like the name of the adventure, you have Joseph Goodman to thank. I was contracted to write an adventure, using "The Dread God Al-Khazadar" as the title. There were several things that had to be accomplished. It was to pay homage to the writing of Robert E. Howard and Edgar Rice Burroughs (particularly his Venus novels), take the PCs to another planet, and be structurally similar to the 1981 film, Clash of the Titans. Originally, the Black Circle took PCs to a ziggurat in a distant jungle, which then transferred them to Madkeen. This is because I wanted to also play with the "ancient astronauts" of Erich von Däniken's Chariots of the Gods? (1968). The "No Ziggurats" ban, however, scuttled that plan. In retrospect, I think that is for the better.

One of the interesting things about emulating Edgar Rice Burroughs is that his science fiction stories often have reference to the political and/or social dilemmas of the time they are written. With Joseph Goodman's kind permission, I included two such elements in the adventure: A political body that would rather circle around a problem forever than solve it, even if it means environmental catastrophe, and fracking. Yes, the Dread God gained his power through fracking in the Smoking Mirror...when you go back and read it now, it will be crystal clear.

This adventure appeared later than intended, and that is entirely my fault. Deadline after deadline blew by, while I imagined that I would make the next one, only to let it blow by. I am amazed that Joseph Goodman still wants to work with me.

Every adventure, in my opinion, requires a confluence of elements that make it "pop". You would think that, with elements of Howard, Burroughs, and Clash of the Titans, there would be enough going on to make a good adventure. But there wasn't. Clash of the Titans introduces a monster that cannot be beaten without first recovering the head of Medusa, and that was the structure I was asked to emulate. Initially, the PCs were going to Madkeen and the Crucible of Al-Khazadar to recover a McGuffin that they could use to defeat the Dread God. There were two problems with this: (1) This could make the climax of the adventure distinctly anti-climactic if it occurred as in Clash of the Titans rather than, say, The Chained Coffin. (2) There was no significant decision-making by the players, which means that the whole adventure was a railroad, and railroads fall flat when the dice hit the table.

This last point was made especially vexing because, faced by something like the Dread God, intelligent players may well simply run. I had to make running impossible. And, if I roped the PCs into the adventure, then I owed it to the players to ensure that some real, meaningful decision-making was placed before them. It is their adventure, after all, not the judge's. If their decisions do not determine how the whole shebang plays out, why are they sitting at the table? I think that the theme of sacrifice covered this well, but it took a long time to click into place. If you have read the adventure, and can imagine it without that element, I think it is clear how dull it would be.

For those interested in such things, the name "Al-Khazadar" suggested Arabic, and the initial plan to include reference to von Däniken suggested Aztec, Toltec, or Incan culture. I tried to include elements of both in the Madkeen naming scheme...in fact, I played around with an online translator a bit. Madkeen initially had a much longer Arabic name, which was shortened to make it catchier, and more easily remembered.

Another artifact of how long the writing took is that  Drongo: Ruins of the Witch Kingdoms came out first, with alternative rules for the sorts of romantic attachments travelers to other worlds always seem to make. Drongo's rules can be used in the place of mine, if you wish, but mine were intended to create the sort of dynamic one sees in an Edgar Rice Burroughs novel, where there may be only one true love for the space princess, but there are an awful lot of other folks obsessed with her.

It took a lot of work, and a lot more time than expected, to make this something that I am happy with. Not only do you get a good adventure (I hope!), but you may well have a reason to return to a world renewed. Who knows? Perhaps someday I, or someone more talented than I, will get to write that adventure!