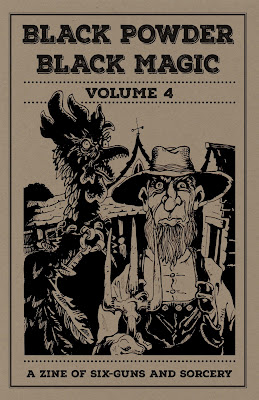 Black Powder, Black Magic Volume 4 was written by Carl Bussler, with additional writing by Anne Hunter. Art is by Todd McGowan. The publisher is Stormlord Publishing.

This issue revolves around "The Maw", a hex-based procedural megadungeon that is central to the frontier town of Brimstone. Let's take a look inside.

The Legend of Brimstone: A faux Sioux legend about how the Maw first appeared. Within the Weird West of Black Powder, Black Magic, the legend may actually be true. This is a short piece that lays the groundwork for Brimstone's legendary under-reaches.

Entering the Mines: "Everyone refers to the unexplored tunnels, caverns, and chasms beneath Brimstone as ‘the mines’, but this term also includes the actual mines secured by various companies."

This article tells you about the lifts, what it costs to be an independent explorer if a mining faction or business doesn't hire you.

Level Names, Dweomers: "All the explorable areas beneath Brimstone are affected by the taint of demon ore, and each level has earned a nickname, derived from the permeating dweomers that affect them, and the creatures that live there."

This article gives a very concise overview of the ten levels of the mines. Each listing includes the "Featured Monsters" found on that level. In most, but not all, cases these are creatures found in the core rulebook.

Hexploration Rules: The rules for procedural exploration of the hex-based megadungeon are detailed in this article. Specifically, movement, forced movement, and camping are covered.

Hex Generation Tables: Each judge's version of the mines is going to be different, and this article gives you the tables needed to create your own unique take on what waits for the PCs below the earth. Tables are supplied for passages, features, complications, and treasures. Some of the complications are hazards that can be found in the mines.

Mine Hazards: This article describes natural (and supernatural) hazards to be found in the mines. The section on ley line nodes is particularly interesting. The original text cites Wisdom checks, an artifact of years of Dungeons & Dragons terminology creeping in. I am told that the pdf version will eventually be corrected, although print versions have already gone out. Wisdom would actually have been the perfect stat to use here, and this is the first time that I actually feel the loss of it in Dungeon Crawl Classics. I am torn between the use of Intelligence or Luck as a substitute.

Demon Shrines: Are there shrines devoted to demons in the underworld of the mines? Of course there are! They are used by cultists and wizards alike. They can offer you some potential reward, if you are willing to meet their price. Also of note are rules or suggestions for attempts to destroy a demon shrine, using them to introduce rare opportunities, and a rundown of the demons of Brimstone.

Wisdom is again referenced in this article, and again it is not easy to determine what should replace it. Since it is a bonus for rapid aging, I would perhaps consider a permanent +1 bonus to Will saves instead?

Hex Map and Hexploration Sheets: Sheets to record your version of the mines.

Faction Encounter List, Levels 1-3: Because there are various individuals, companies, institutions, and cults interested in the mines, you need a d12 table to determine a random faction.

Equipment Prices: In US dollars of the time.

Familiars of the Dark Territories: Written by Anne Hunter, this article supplies 20 types of familiars for each alignment. Some of these might be usable in any setting, and some of them are definitely setting-specific....for example, a mysterious fey figure dressed in gunfighter’s outfit whose mouth is covered by a bandanna, and who never speaks.

Varmints!: This issue introduces the Ore Hound, Pack Goat and Canary Lizard on the useful side, and Old Mac and Clara, his Demon Chicken, on the somewhat less than useful side. Of course, I mean useful for PCs exploring the mines, as opposed to useful for the judge to oppose those PCs.

All in all, this is another excellent issue, and one which makes the Weird West of Black Powder, Black Magic eminently usable in long-term play.

Get It Here!
Posted by ravencrowking at 08:32