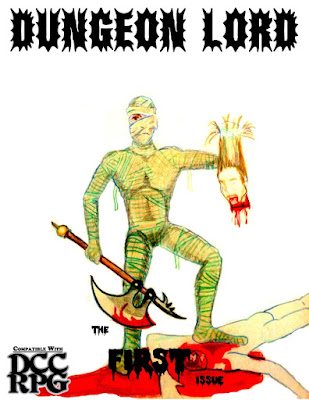 This issue of Dungeon Lord was reprinted for Gary Con 2015, updated for Dungeon Crawl Classics after a release at Albuquerque Zine Fest in October 2014. My copy, at least, is printed on a bright lime green stock that really stands out. It is also notable that this issue is not statement-sized (a standard sheet of 8 1/2 x 11 paper folded in half), but is instead about 5 1/4 x 7.

Calcified Caves of the Slime Yeti: A one-page dungeon by Ron Yonts. The map appears to be by Dyson Logos, but, if so it is uncredited. If not, kudos to the cartographer, because I am a fan of the style. This dungeon contains no statistics. EDIT: I have had confirmation from Ron Yonts that he drew the map. Great work!

Random Dungeon Elevation: A simple system for determining the slope of dungeon corridors.

Some Ziggurat: A poem by Julian Bernick.

The Caves of the Sacred Seven: A level 1-2 adventure that takes up 16 pages of the zine. The adventure is a testament to the fact that cavemen belong in Dungeon Crawl Classics, but doesn't necessarily remain in prehistoric times. Tunnels might lead through time and space, and the PCs may find themselves facing a dragon in the Mirror Realm. This final event will almost certainly result in a TPK.

The Tomb of Zarfulgar the Lost: A mini-dungeon that spells out "ABQ Zine Fest 2014". Stats are not included.

Back Cover: Contains a 12-room dungeon map. If you use this, you will want to renumber the rooms, as there is no logical progression I can see to the numbering scheme.

Overall, this may be considered an homage to the Do-It-Yourself spirit of Old School Gaming, and of Dungeon Crawl Classics in particular. Using this will require you to do some prep work. If you are willing to do that work, you will find some creative content that serves as a reminder that the spirit of the Old School Revival is not always about polish. Sometimes it is about heart.