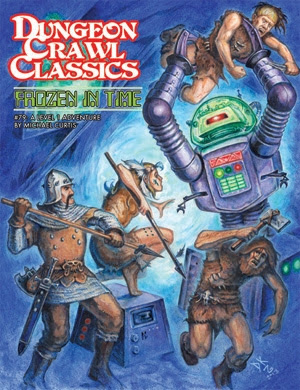 DCC #79: Frozen in Time is a level 1 adventure by Michael Curtis. Art is by Doug Kovacs, Jeff Easley, and Stefan Poag. Cartography is by Doug Kovacs and William McAusland. The publisher is Goodman Games.

In addition to being playable as a level 1 adventure, this module includes everything you need to run it as a 0-level funnel with primitives from the Forlorn North. I have run this adventure now several times, and have always run it using that option.


This adventure module was the first “science fantasy” adventure for DCC RPG and has proven very popular.

I am not certain that he is completely right here, but this is certainly the first official Goodman Games "science fantasy" adventure for Dungeon Crawl Classics, and it is certainly very popular! In fact, I once listed it as the #4 "Must Have" adventure for the game. I suspect that the first science fantasy DCC adventure was Lair of the Mist Men by Jon Marr, and I think Frozen in Time might have just squeezed in ahead of Pulp Weird Encounters #1: The Tomb of Squonk and the Silent Army by myself and Charlie Scott. Lair of the Mist Men hit RPGNow in April of 2013, Pulp Weird in June, and Frozen in Time in July. But there is typically a lag between a Goodman Games release and its appearance on RPGNow. The Mist Men themselves first appeared in The Ooze Pits of Jonas Gralk, by Jon Marr, back in July of 2012!

It may not really matter which came first. This has been, at times, my older daughter's favorite Dungeon Crawl Classics adventure. In part this was because of the sheer fun of trying to identify things that the player would recognize, but the character would not. The artwork in Area 3-5 brought her particular joy. And, when I first ran this adventure (at Wizard's Cache MiniCon in Toronto), she had the only character who survived when the party ran in absolutely the wrong direction at the end!

Interestingly enough, despite of how highly I regard Frozen in Time, author Michael Curtis apparently does not consider it among his best works. I can understand that, because he has done some adventures which require a lot more skill to bring about a desired effect, such as The Sinister Sutures of the Sempstress, The Old God's Return, and Intrigue at the Court of Chaos. Michael Curtis wouldn't tell me what his favorite children are, and that's okay. The Powers that rule over adventure design prefer that authors don't pick and choose between their children.

(You can consider the above paragraph an obvious attempt to lure the author into revealing his secrets!)

What I can say is that, with Frozen in Time, I think that Michael Curtis hit the mark exactly right. This is a metric that is individual for each adventure; what fits in The Making of the Ghost Ring would not necessarily fit the feel of Frozen in Time. And Frozen in Time is, in my humble opinion, a masterpiece. I know that I have certainly had a lot of fun with it.

Plus it has robots. And a Tyrannosaurus Rex.

And an anthro-antis spawned from the nuclear holocaust of the Great Atomic Wars of the distant future.