Escape From the Shrouded Fen 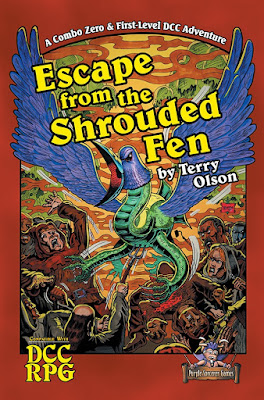 Escape from the Shrouded Fen is a combined 0-level funnel and 1st level adventure by Terry Olson. Art is by Benjamin Marra and Jon Marr, Cartography is by Dyson Logos. The publisher is Purple Sorcerer Games.

Disclosure: I have a playtest credit on this product. I am also mentioned in the Author's Notes in the PDF of additional materials. Finally, there is a hidden reference to one of my own adventures (which I did not notice, but which Terry Olson was good enough to point out to me).

Some time ago, I wrote a post about devising initial adventures on Raven Crowking's Nest. This article was later reprinted in the first volume of Dispatches from Raven Crowking. Although separate products - like Prince Charming, Reanimator followed by Creeping Beauties of the Wood - attempted to mirror the structure I advised, as far as I know Terry Olson is the first author to actually use this structure in a single product.

A funnel adventure must answer the question, "Why did these people stop being farmers?" Some opportunity, some misadventure, some event must take the PCs out of the sphere of the ordinary and place them apart from the common lot. Escape from the Shrouded Fen handles this in a manner similar to A Gathering of the Marked - you are selected by supernatural forces whether you like it or not. While, outside of a funnel, this might be considered the height of railroading, within the funnel structure it works extremely well.

There is a definite growth arc, where the newly-minted adventurers get to face off against an adversary they were nearly helpless against at 0-level. Players love the opportunity for revenge, in my experience, and that is delivered in spades.

Some of the encounters are quite tough, and some require brains over (or in addition to) brawn to survive. That's completely okay. Players who imagine that the adventure is scaled for their characters will soon learn otherwise. That is how it should be. The judge is also provided with some opportunity to role-play, in accordance with Terry Olson's design philosophy.

Along with the digest-sized adventure (107 of 112 pages are actually meat, the rest are credits, OGL, etc.), the product has a 61-page appendix containing statblocks, tables, maps, printable paper miniatures, illustrations, etc. The adventure contains the full write-up of the Fog Beast as a patron, and this write-up is included as printable pages in the appendix (including all spells). This should come as no surprise, as Purple Sorcerer Games' appendixes and printable extras have been proven time and again to almost double the value of the adventures they are designed for.

Should you choose to run this adventure, take close note of the stated and implied history of the setting. There is plenty of material that you can use to spur further adventures in the area around the Shrouded Fen. In fact, a mini-gazetteer of the surrounding region, with old burial sites and stoneworks noted, would be an excellent follow-up product.