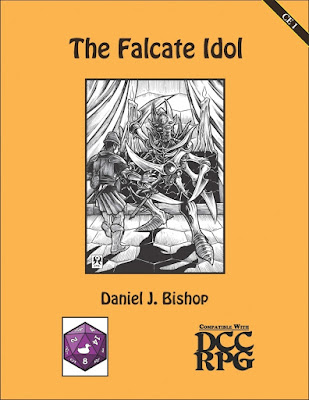 CE 1: The Falcate Idol is by Daniel J. Bishop, with illustrations by Luigi Castellani and cartography by Tim Hartin. It was published by Purple Duck Games.

The Falcate Idol is described as "An adventure for 2-8 level 2 Dungeon Crawl Classics characters. This adventure is also suitable for 1-2 level 3 characters, or a solo level 4 thief who relies primarily upon stealth and caution." It is, in reality, the first of a series of products designed to aid aspiring judges in both (1) building their campaign milieus, and (2) providing the materials necessary for the judge when the players dive into the "Quest For It" ethos of the game.

The maps for the CE Series were all drawn by Tim Hartin, with the only limitation to his creativity being that each map has from 5 to 10 keyed locations. In many ways, The Falcate Idol is a love letter to Lord Dunsany's Distressing Tale of Thangobrind The Jeweller, with the concept of the Harrower being drawn from that story and the crescent shape of Area 7 on Tim Hartin's map.

The Egg of Creation found in Area 10 is specifically there to allow additional PC-inspired quests to use the location: removal of corruption, increasing a spell check result, trading with demons, a quest for a patron, and/or temporarily increasing Luck. As far as I know, the Yolkless Egg in DCC #80: Intrigue at the Court of Chaos is purely coincidental, although I would encourage a judge who ran Intrigue at the Court of Chaos to link the two.

The table of "Random Treasures Found on Fallen Thieve"s on page 4 might have been an inspiration to Marzio Muscedere's much longer table in Death Slaves of Eternity. I would like to think it was, anyway. For those who are curious, the small stone carving of an owl is inspired by something that I actually own. It is also partially inspired by James Raggi's "The Owl Service" encounter in The Monolith From Beyond Space and Time, which every Game Master should own. The bronze tube is inspired by Robert E. Howard's The Tower of the Elephant. The silver necklace with emeralds was based on the Emeralds of Girion given to the Elvenking by Bilbo in The Hobbit. The iron ring, though, has nothing to do with J.R.R. Tolkein.....the exact inspiration escapes me at the moment.

On page 5, you will discover a table that makes use of the suggestions from the "Magic Here and Magic There" section of the core rulebook. This was the second time I included such a table; the first appeared as part of Icon of the Blood Goddess in In the Prison of the Squid Sorcerer.