Feast of the Preserver 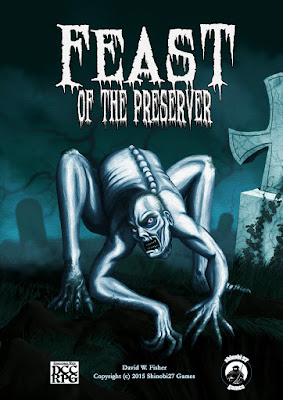 Feast of the Preserver is a level 3-4 adventure written and illustrated by David W. Fisher, with cartography by Brian Van Hunsel. It is published by Shinobi27 Games.

Well, looking at the cover, I don't think it gives away too much to note that ghouls are involved with this adventure, and the Endfast Feast in Barrowtown might well end with the PCs being part of that feast. In fact, this is billed in the Introduction as "a horror-based adventure" with "a very real threat of the entire party being annihilated by the residents of Barrowton, if they don’t use their heads." This is not an exaggeration.

I had the good fortune to work with David Fisher on Angels, Daemons, and Beings Between, and also on The Revelation of Mulmo. He did the cover and some interior art for D.A.M.N. #1. I did some editing for him on The Trolls of Mistwood, and some writing for its upcoming sequel, Curse of Mistwood. This is the sort of thing that normally comes up as "Disclosure", but I have been using "Disclosure" to indicate links to specific products, as my interactions with other Dungeon Crawl Classics artists, writers, and publishers is pretty far ranging. All of that is to say that I have a fairly high regard for David Fisher which you, the reader, should probably take into account.

Dungeon adventures are fairly simple affairs, and can be run with a minimum of prep. Town adventures take more prep, in my experience, because a town fall flat if thing don't stay in motion. This adventure starts with events in Barrowtown, and then probably moves on to the exploration of an "abandoned" silver mine and a manor house. The cartography for the town and manor house are particularly nice, and would be useful even if you were not running the adventure.

Barrowtown would fit in to most Dungeon Crawl Classics campaign milieus, but may be especially apt for inclusion in a Shudder Mountains or a Black Powder, Black Magic campaign. In the latter case, the judge will have to make some adjustments to statistics to reflect the setting - such as including a few firearms. Because the adventure contrasts the normalcy of a typical village with the occurrences at Barrowtown, it would be much harder to reskin the adventure for, say, the Purple Planet or Madkeen. There might even be some potential linkage with the Umerica of Crawling Under a Broken Moon.

If you have run The Arwich Grinder, please try to work some reference in to Sliggeth, if only in the library of Bargus Manor.

Feast of the Preserver includes a partial write-up of a new patron, Scrimage the Preserver, including invoke patron spell check results and patron taint. It is noted that "Rather than patron spells, The Preserver unlocks psionic potential in his followers. Judges can create their own psionic rules to govern how these abilities work or, if psionics are not part of your campaign, judges are free to design their own spells to accompany this patron." My recommendation for psionics rules would be Mind Games, from Shield of Faith Studios.