The Folk of Osmon 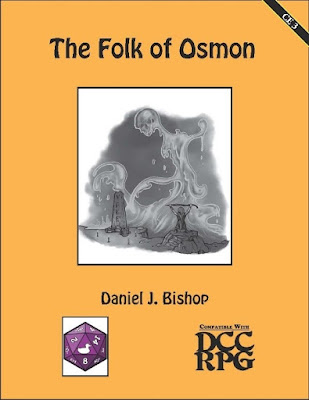 The Folk of Osmon was written by Daniel J. Bishop, with cover art by Gary Dupuis, interior art by Luigi Castellani, and cartography by Tim Hartin. The publisher is Purple Duck Games.


The Campaign Element (CE) series attempts to address these specific areas. Now, when your wizard is looking for a spell, your cleric is sent on a mission from her deity, or your thief simply wants to find a location where stealth and a cunning mind are paramount, you will have an answer at your fingertips. Weave these campaign elements into your world, mesh them into other modules and areas of your own creation, and watch the “Appendix N” vibe of your games grow.

I wrote, in the "Using this Location" section, that "This area is intended to be used as a hazard and adventure location in an ongoing campaign milieu. Perhaps it is near the village that the characters came from at 0-level. Perhaps it is along an oft-travelled path between the village and a persistent adventure location,such as a dungeon that cannot be fully explored in a single outing. There is some advantage for the judge and players in allowing the characters to explore the area in the daylight first, building toward more dangerous encounters at night."

The Folk of Osmon themselves were inspired by beings from Edgar Rice Burroughs' Lost on Venus. Interestingly, Burroughs' Amtor (Venus) novels were later an inspiration for The Dread God Al-Khazadar, as requested by Joseph Goodman. I am not sure if he had noted the Venusian inspiration in this product or not. Osmon itself is a combination of something along the lines of House from Sterling Lanier's Hiero's Journey, and Juiblex from the 1st Edition of Dungeons & Dragons.

The swamp creatures were designed using James Raggi's Random Esoteric Creature Generator, seen through a Dungeon Crawl Classics lens. The "swamp light faerie" is similar to a will-o-the-wisp, but with the added bonus of being able to mess with a dwarf's class ability of smelling gold. These fey also force the PCs to decide whether to dig by day or night if they acquire a map to Red Jack Kaven's treasure. And every judge needs some hidden treasures to provide maps to.

At the time this was written, Purple Sorcerer Games had published two of its "Sunken City" adventures, and when I was working on the text, it occurred to me that the Osmon Mire may well be a portion of the Great Swamp in many judge's campaigns. Another possible link is to A Lesson From Turtles, in Appendix N Adventures Add-Ons #1-5, with the ancient and ruined city of Osmon being part of the same submerged civilization as is mentioned in that encounter. This may also, if the judge desires, be the same civilization that build Silent Nightfall.