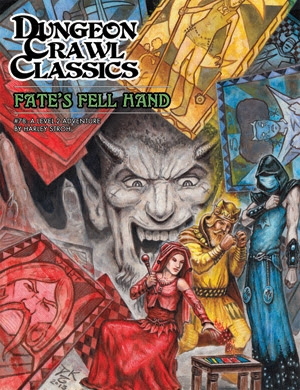 Dungeon Crawl Classics has many great adventures in its catalog. One of the things that makes these adventures great is that, in many cases, DCC adventures don't care what level you are. Peasant farmers encounter gods. Starting adventurers become embroiled in the intrigues of the Courts of Chaos. I once described DCC as "the game where you fight unknown monsters, speak with alien gods, and find ancient magicks.....and then you reach Level 1." There is no such things as "working to get to the level where the cool things happen."

Fate's Fell Hand is a 2nd level adventure where cool things happen, and where the judge literally doesn't know how events will end or unfold. You may not survive it, but you are guaranteed not to be bored!

According to the Introduction:


In Fate’s Fell Hand, the adventurers play the deciding role in a war of three wizards. Trapped within a demi-plane, the arch-magi and their vassals vie for their freedom, but with the coming of each new day all gains are lost and the game begins anew. The arrival of the PCs upsets this ancient balance, triggering a chain of events that will destroy the demi-plane and all trapped within.

To escape the shrinking realm, the PCs must do what the arch-magi cannot: achieve mastery over the Deck of Fates and its diabolic ward.

The Deck of Fates is, itself, perhaps the coolest handout of any Dungeon Crawl Classics adventure, if only because of the sheet impact that it can have on game play. The PCs may start out as free agents, but if they are not careful they may be forced to serve the Seer-King Darjr, the enchantress Erodiade, or the "accursed scribe Al-Hazred", who any fan of H.P. Lovecraft ought to recognize. And their allegiance can shift without their control.

In a way, this adventure is a hex crawl. In another way, it is a terrifying race against time and Fate as the hexmap shrinks every day. Eventually, the demi-plane disappears, destroying the PCs if they remain upon it. Role-playing is as important as fighting. In essence, the entire adventure is a trap with a time limit. If the players figure out how to escape the trap in time, all is well for their characters. If not....Needless to say, tension will ramp up as the adventure nears its end.

I am a major fan of Harley Stroh's work, and this is among his finest.