Maiden Voyage of the Colossus 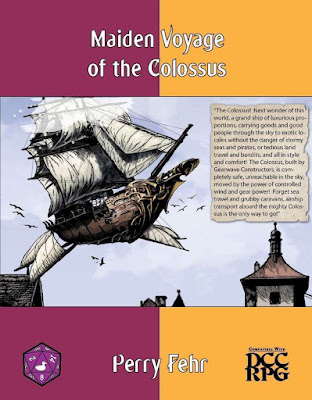 Maiden Voyage of the Colossus was written by Perry Fehr. It is a "dual-game adventure for OGL adventures in Porphyra and Dungeon Crawl Classics" - 2nd level for Dungeon Crawl Classics. Artwork is by Gray Dupuis, Rick Hershey (cover), Malcolm McClinton, Matt Morrow, Brett Neufeld, Ryan Rhodes, and Michael Scotta. Cartography is by  Kristian Richards. The publisher is Purple Duck Games.

Disclosure: I am listed as a DCC Playtester. I was involved with converting the original statistics to Dungeon Crawl Classics, more on which below.

“The Colossus! Next wonder of this world, a grand ship of luxurious proportions, carrying goods and good people through the sky to exotic locales without the danger of stormy seas and pirates, or tedious land travel and bandits, and all in style and comfort! The Colossus, built by Gearswave, Inc., is completely safe, unreachable in the sky, moved by the power of controlled wind and gear power! Forget sea travel and grubby caravans, airship transport aboard the mighty Colossus is the only way to go!”

This adventure was written and playtested at the 2015 Iron GM competition at the Great Falls Gaming Rendezvous, where it took Third Place. Contestant GMs get one hour to draft an adventure using three theme phrases (in this case, Airship, Hidden Agenda, and The Clockmaker). After a four-hour play session, the GMs are evaluated by their players.

This adventure is set in the Purple Duck setting, Porphyra, and is actually best if set in that world. When I ran it, I had the PCs summoned to the Gearswave complex on Porphyra, where they were awakened much as described in the adventure start. The major difference was that they were in a summoning circle, were considered "demons" from "a lower world", and had to verbally accept the terms of a contract before being let out.

The adventure then ran much as written. Once the Colossus had been saved, the PCs discovered that their initial contact had been assassinated. "And which lower world do you belong to, exactly?" This gave me a chance to drop them into another adventure setting before sending them home.

Although I did a thorough Dungeon Crawl Classics reskinning of the adventure - it is my opinion that Dungeon Crawl Classics allows for the unexpected and just plain weird far better than 3rd edition D&D-based games - some of these changes were not adopted for the dual-stat format. I suspect that, if you achieve Third Place in a difficult contest, you would prefer not to have your material altered too much. Another part of me suspects that it is difficult to put two or more sets of statistics together in one product, with one product having more bells and whistles than the other.

When I was working on this, I was under the impression that it would be like the tête-bêche dual sci-fi novels or the old Traveller double adventures that were designed to mimic them. Not so!

By putting the material effectively side-by-side, you can see that, while Dungeon Crawl Classics information needs to be supplied for all fourteen creatures encountered in the adventure, and d20 statistics need to be supplied for only four, those d20 statistics take up more space. I can sort of understand not wanting to add insult to injury by giving the villain death throes only in one version.

The Endzeitgeist review of this product was particularly harsh:

Well, this may sound harsh, but the book is utterly delusional regarding its compatibility with DCC. I’m sorry to say it, but apart from DCC-rules being here, this pdf has NOTHING that even remotely pertains DCC’s aesthetics. DCC’s general assumption is that magic’s weird, uncontrollable and volatile; its whole premise is grittier, darker and the whole depiction is radically different, with the emphasis on patrons etc. On the other hand, Pathfinder features reliable magic and is geared significantly more towards high fantasy gameplay.

I think that a lot of these problems go away if the judge adopts the framing that I used. Being called into a world with industry - whether magical industry or otherwise - is not unknown in Appendix N. The reliable magic in Maiden Voyage of the Colossus should not be construed as a problem if the players themselves are not able to rely on it. For this adventure, presentation is key.

I had a lot of fun running this adventure. Using the right framing narrative, you should be able to do the same. They key is to ensure that you are not implying that airships or magic-as-technology are going to be rife on your world. I could easily see the Colossus coming to a setting like Black Powder, Black Magic, Dark Trails Weird Frontiers, or Mutant Crawl Classics from another dimension. Sabotage does not need to occur on the actual maiden voyage. Likewise, a setting like Trench Crawl Classics, Drongo, Madkeen, or Pandemonium might be able to use the material with very few changes. In Trench Crawl Classics, for instance, the Colossus may be an American zeppelin that the PCs are trying to save from German spies.

While the adventure might seem like a strange fit for Dungeon Crawl Classics, the fact that it is a strange fit can be used as a strength.

The consortium that employs the PCs, Gearswave, Inc., is described as a patron with check results for invoke patron.

An urgent summons in the middle of the night, a hasty boarding in secret, a mysterious agenda… Brave adventurers find themselves on board the maiden voyage of a new flying wonder- the Colossus, a flying airship meant to revolutionize travel!  But not all are happy with this innovation, and it is up to the party to stop the sinister plans of The Clockmaster!