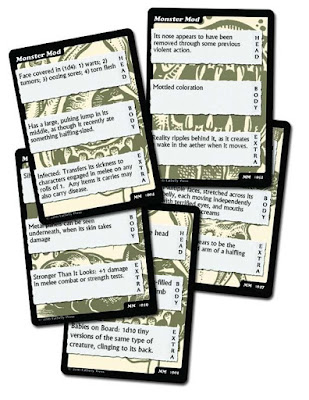 These cards are not usable only for Dungeon Crawl Classics, but can be used for any role-playing game where monsters might be encountered. They are very much system neutral. There are 42 cards in the deck, and each card has an entry for "Head", "Body", and "Extra", each of which has an entry that may be cosmetic, or may prompt the judge to change the statistics of a creature.

One of the advantages of the Monster Mod Cards method is that a number of cosmetic changes can be applied as quickly as drawing a card...which is faster than consulting a table, and allows the judge to differentiate individuals in a horde of beastmen.

"Hungry-looking, razor teeth-filled mouths at the end of each limb"

"Skin appears to be stitched together with thick black thread"

"Splits into two creatures when slashed"

"Intent on stealing internal organs from its targets"

It should be noted that, if you order the physical cards, you can now get it with a pdf of the cards that you can print out on your own. This pdf would be more valuable to the harried judge if it was OCRed, which it is not at this time.

Long ago, when you were a kid (longer ago for some than others), you didn't know the stats of a kobold. Heck, you didn’t even know what a kobold was, aside from whatever description you had been given. And if you faced a group of kobolds, you probably didn’t know – at least that first time – that all of them would fight and die after a set number of hits were taken. You were creating a scene in your mind that you’d never seen before. What a wonderful thing that is. It’s one of the reasons many of us love these games. It’s a thread back to childhood.

If that sense of wonder that we all had as a kid is missing from your tabletop games, then you and your fellow players might benefit greatly from mixing things up a bit. Inspired by the OSR, and made to be used with RPGs old and new, our deck of Monster Mod Cards will help change things up, just enough to keep your players in that sweet spot of imagination and wonder, requiring them to create brand new scenes in their minds.

Each 42 card deck features no fewer than 126 new attributes to add to each creature your players face. To use them, simply draw a card for each encounter, and use any of the attributes or tables presented to add flavor and mystery to your creatures. Don’t like what you drew? Draw another one, or use them only for inspiration.

So bring the weird. Bring the gonzo. Make it rain air-swimming robot lobsters. Most importantly, craft those new experiences, and make memories out of them. It’s your game, after all.