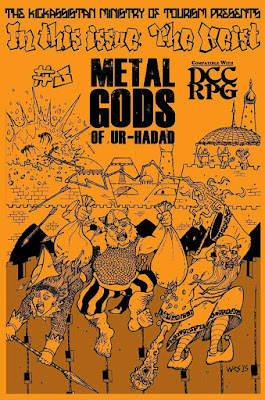 What's A d11?: A d12 mechanic invented by Adam Muszkiewicz, which was first described in Issue #2.

It is used again in this issue, so explanation is required.

Currency From Ur-Hadad: Author Adam Muszkiewicz describes the forms of coin you might find in Ur-Hadad, from the "vulgar currency", consisting of silver bits, copper chits, bronze bobs, and gold crowns, to the "high currency" of coinage carefully minted by five noble houses.

Atraz A'Zul, Mother of Spiders: The Rev. Dr. Edgar Johnson III offers a new patron. Patron spells for levels 2 and 3 are not provided; the patron is otherwise complete.

Atraz A’Zul is a spider demoness of ancient lineage whose intrigues are manifold, subtlety legendary, and cold calculation uncompromising. She is the demon spirit of dark and quiet places and the unseen things that creep there. To form a bond with Atraz A’Zul, one must go into the desert and ingest the hallucinogenic spider known as the Dream Stalker. Atraz A’Zul will appear to the dreamer who must pledge his troth to her and her alone. Those who serve the demoness are expected to protect spiders, scorpions, and other poisonous vermin.

The Heist! - An Adventure Toolkit: Written by Adam Muszkiewicz, this is similar to Street Kids of Ur-Hadad in Issue #1 and Secrets of the Serpent Moon in Issue #2, in that it offers not a single adventure, but the means to create a great number of adventures with a series of tables. I would imagine that these toolkits are relatively hard to write, given the level of creativity and re-usability involved. This one, in particular, is of great use to anyone running an urban-based campaign.

Half-Level PCs in DCC: An article by Adam Muszkiewicz, inspired by Doug Kovacs. This is for beefing up 0-level characters for funnel-type games. For another take on half-levels, aimed at providing a means for multiclassing, see Crawl! fanzine #10.

Street Foods of Ur-Hadad: Presented by "the Metal Gods of Ur-Hadad", this is a single-page table using 3d30 to give you an idea as to what your PCs have just been offered by a street vendor. Is it poached tongue in a black bread sandwich? Perhaps chilled croctopossum suspended in jello? Ah, Ur-Hadad. So much on offer that I would never consider eating...

Dungeon Insert #3: The Marrow Web Bridge: Another great encounter, written by Wayne Snyder. I'm not going to spoil it, but it is excellent.