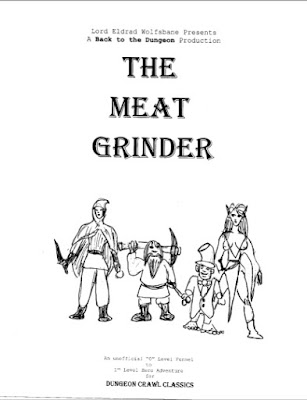 The Meat Grinder is a 0-level funnel written and illustrated by Lord Eldrad Wolfsbane and published by Back to the Dungeon.

What is clear is just how exciting it was to discover this game, and the energy with which I crafted adventures. I filled a notebook with monster statistics, including a ton of dinosaurs and other prehistoric beasts, as well as miscellaneous mythological and fictional horrors that Dr. John Eric Holmes had not included in the Basic game.

Dungeon Crawl Classics brought that sense of creative energy back, in a way that I had not experienced since the halcyon days of High School (when I was playing the 1st Edition of Advanced Dungeons & Dragons).

The Meat Grinder is like those old games...down to coding the map with letters instead of numbers! This is not a slick product by any means, but it is a fun one, and it perfectly captures the asthetic of weird fantasy. The illustrations are likewise energetic if not professional. Even the typed font screams the 1970s.

The Great Pig Beast and his Goat Men Soldiers born of demons and chaos, he is the enemy of everything! The Soldiers of the King's Army have all died in battle, at least that's what they dying soldier told us when he rode up bloody and babbling. We (A LARGE Group of "0" Level Characters) were sent as irregulars from our village to stop the goat men from circling around and coming through the west hills! There were no goat men coming through the west hills as they MUST have came through on the east river! OH NO! Right where our families were sent. BY THE GODS NO! Our families will be killed by ambush on the way to safety by the vile stinking goat men. We will have nothing left to live for except for blood and vengeance. It is as we feared ...