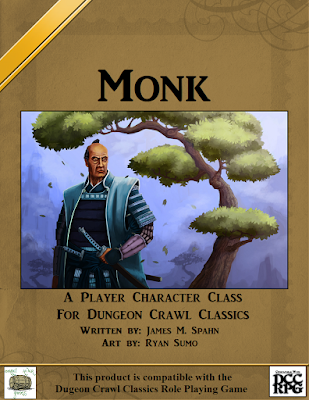 Monk was written by James M. Spahn, with art by Ryan Sumo. The publisher is Barrel Rider Games.

There are some who wander the world seeking perfection in both body and mind. Forgoing the fetters of the world, they seek to reach the absolute apex of human potential. By mastering flesh and spirit they can harness all the potential locked inside themselves. They need no weapon to win gold and glory. They kneel before no gods and they beg patronage from no inhuman forces. Instead, they gaze ever inward and in balance and contemplation, they find power.

When the monk appeared as a character class in Blackmoor, it was starting a journey that still hasn't ended. Often, the problem was how to fit an essentially Eastern archetype into a nominally Western setting. One solution to this was the original Oriental Adventures tome. Another was to point out that, with a Monster Manual containing rocs, rakshasas, ki-rin, djinn, shedu, and efreeti, the basic setting of Advanced Dungeons & Dragons wasn't nearly as European as some might think.

Monks are also not entirely unknown in Appendix N fiction. In The Hour of the Dragon, four characters best described as monks are secondary antagonists.

Returning to his palace chamber, Valerius summoned before him four men of curious and alien aspect. They were tall, gaunt, of yellowish skin, and immobile countenances. They were very similar in appearance, clad alike in long black robes beneath which their sandaled feet were just visible. Their features were shadowed by their hoods. They stood before Valerius with their hands in their wide sleeves; their arms folded. Valerius looked at them without pleasure. In his far journeyings he had encountered many strange races.

"When I found you starving in the Khitan jungles," he said abruptly, "exiles from your kingdom, you swore to serve me. You have served me well enough, in your abominable way. One more service I require, and then I set you free of your oath."

When a product is a single character class, it is important to ensure that any discussion of the class doesn't give so much away that the product itself becomes useless. This perforce limits what I can describe.

The three hooks for the class are a "Zen die" (which allows certain Mighty Deeds when unarmed, or "feats of extraordinary physicality" such as those seen in Wuxia films), the ability to avoid attacks when not wearing armor, better healing, and limited thieves' skills. Monks also have a Zen critical die, allowing them to do better criticals when unarmed than when armed, which is a nice touch, and uses Dungeon Crawl Classics specific rules to promote playing the class as intended, rather than forcing specific styles of play.

Monks follow the Path of the Samurai, of the Sensei, or of the Shinobi depending upon alignment. Alignment also determins if a monk practices kendo (Art of the Sword), kyudo (Art of the Bow), or anatsuken (Art of Assassination), allowing them to use their Zen die (and Zen critical die) as though unarmed with a longsword, longbow, or garotte.

An adventuring monk is a wandering ascetic who likely spent some time in a monastery before setting out into the world. There he learned the ways of unarmed combat, stealth and what it means to tap into his true potential. He has set out from the hidden temple where he learned but a fragment of wisdom from the ancient masters of old and now seeks the company of other exceptional individuals so that they might together rise above the mundane limits of the mortal form to true perfection.

Overall, this is a flexible class with flavor evoking both the Kung Fu television series that gave rise to the original monk, and wuxia films (such as Crouching Tiger, Hidden Dragon). My own familiarity with wuxia is limited, but I did watch Kung Fu back in the 70s, as well as Bruce Lee films. I would be interested in seeing the author's "Appendix W" that inspired this version of the monk.