The Meat Grinder Too 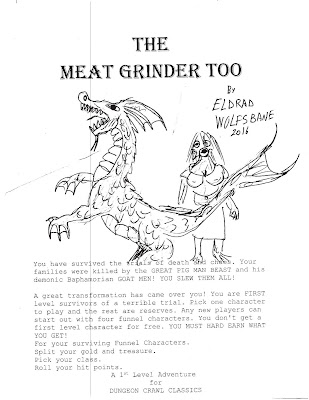 The Meat Grinder Too is a 1st level adventure written and illustrated by Lord Eldrad Wolfsbane and published by Back to the Dungeon.

This is a sequel to The Meat Grinder. I would urge you to read that entry in order to understand this one, if you have not already.

You have survived the trials of death and chaos. Your families were killed by the GREAT PIG MAN BEAST and his demonic Baphamorian GOAT MEN! YOU SLEW THEM ALL!

A great transformation has came over you! You are FIRST level survivors of a terrible trial. Pick one character to play and the rest are reserves. Any new players can start out with four funnel characters. You don't get a first level character for free. YOU MUST HARD EARN WHAT YOU GET!

That is from the first page, and the energy is roughly the same throughout the adventure. The characters arrive at Porttown, "a horrid collection of 12 huge rotting buildings" built over the Arkham River. "Crossing the river is a huge cyclopean stone bridge with fould carving of hedonistic heather rites and practices from some ancient age."

Just as with The Meat Grinder, The Meat Grinder Too channels the energy and tropes of the pulps, as well as of 70's-era role-playing games. This is like a metal version of some of the Judge's Guild material from gaming's Golden Age.

And, as in those days, the simple pleasures of the River Rat Tavern give way to adventure literally served on a platter! It's time to explore the Sea Cave of the Fish King if you don't want Chaos and Death to rule the world....

This is not a polished product. It is also a product that offers a Parental Advisory: "EXTREME VIOLENCE AND HEAVY METAL OCCULTIC CONTENT". It is also not politically correct in any sense of the term. But it is fun.

The townspeople point towards a foul and polluted coastal plain save for corral [sic] spires and hills covered in a dead forest littered with broken ships and trash. "That is the way you must go to get to the sea caves." says a towns person pointing east to the coast. Strange screeching black sea birds fly above. The sea behind crashes on a rock cliff face below. A storm is blowing in from the distance with thunder and lighting crashing blows a stinking sea in into the faces of the party. One large hill juts out of this area with huge double doors. Above the doors is pentagram with an eye in the center.

Get It Here!
Posted by ravencrowking at 13:04