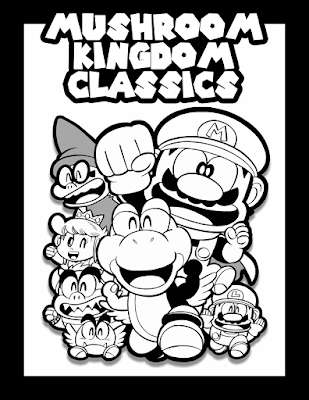 Mushroom Kingdom Classics was written by K.J. O'Brien. Map and character sheets are by K.J. O'Brien (heavily influenced by sheets available at Purple Sorcerer Games). All other art was “borrowed” from Google Images. For lore and image references, check out the Super Mario Wiki. The publisher is KJ O'Brien.

This also becomes a great example of how the rules can be bent to meet the needs of the game, rather than the game bending to the needs of the rules. So warriors become Tough Guys/Gals, clerics might be Mushroom Priests or Healers, and your zero-level PCs might be a Toad Instructor, a Human Plumber, or a Yoshi Star Gazer, among others.

Every race type has its own special abilities, from the Super Jump that humans can do to the sticky tongues of the yoshi. Race is not class in the Mushroom Kindom, and a character can be of any of the following races: Human, Koopa, Toad, or Yoshi.

The pdf comes with a zero-level funnel, The Old Mansion on Rubbleknot Hill, paper minis, and zero-level character sheets that look like the Purple Sorcerer sheets redone by 80s-era Atari. Even if you don't have children, this is a surprisingly playable version of the game! Doubly so if you know a gamer who is addicted to Mario Cart.