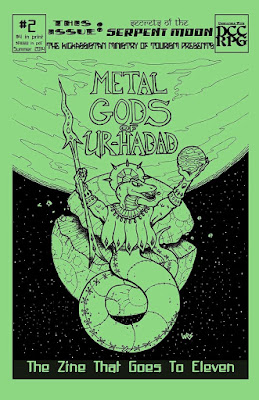 Metal Gods of Ur-Hadad #2 (summer 2014) was written by Edgar Johnson, Adam Muszkiewicz, Donn Stroud, and Jason Hobbs. Art is by Wayne Snyder (except for an image of the Purple Sorcerer, by Jon Marr, which appears in an ad). The publisher is the Kickassistan Ministry of Tourism.

Thank you indeed! Let's look inside.

What's A d11?: A d12 mechanic invented by Adam Muszkiewicz that just about anyone should be using.

Editorial: Adam Muszkiewicz muses on the idea of an Ur-Hadad canon. The short answer: There is none. Nothing is true. Everything is permitted. "You will do precisely what you want with Metal Gods material, so why should we pretend it would be any other way?"

Really nice to have that put in writing. It is part of the heart of Dungeon Crawl Classics, after all! It also plays into the first real article in the issue, by Edgar Johnson.

Thoughts On Dice Notation: A discussion of "exploding dice", and how they are indicated. As with the d11, exploding dice are a tool that every judge should have available. In short, if a die roll is written 2d7! (with the exclamation point indicated that the die roll is exploding), and a natural "7" came up, you would reroll and add that the the original score. Keep doing so as long as natural "7"s are rolled.

(The author uses 2d5! in his example, but as the d7 is the coolest die on the dice chain, I substituted.)

Long, long ago, before there were Men, there were two great races. One of them, usually just called the “Old Ones,” came from beyond the stars, through a place in the bottom of the world. They are gods, it is said, or demons, depending on who you’re askin’. But one thing’s for sure: They weren’t from around here, on Ore. They don’t bleed good red blood (or even green blood like the damned elves), and their ways are inexplicable, save for one thing: They wanted to rule this place. They almost did, too. Now, to look at them, they weren’t too different than one of them squids what wash up on the shingle sometimes, but bigger, very much bigger. When came the Old Ones from the place beyond the stars, they took to the deeps of the seas, and built there many great cities and, in them, works of great power, though their purposes were unintelligible to the likes of men. Mayhap the serpent-men know more, but they ain’t telling, those what still slither amid the wild places of Ore.

Some of this may contradict the background Adam Muszkiewicz provided in Metal Gods of Ur-Hadad #1, and this is part of the reason that there is an Editorial at the start of this issue.

Metal Magic Items: Every setting needs appropriate artifacts, and in this case a few are supplied by Jason Hobbs and Adam Muszkiewicz. In this case, they are the Rod of Robhal ("offered to the Priests of Joodahs by the Metal God Robhal, lord of law breakers, himself"), Magor’s Manacles, and the Sanguine Resonator (for some reason, Stamina is called Toughness in this entry).

Secrets of the Serpent Moon: Like Street Kids of Ur-Hadad in Issue #1, this is a kit for creating unique adventures. And it is a real thing of beauty. Of course, it gives you a lot more than you will need to create a single adventure, so you will want to refer to it again and again until you have squeezed it dry. Adam Muszkiewicz wrote this piece of inspired goodness.

Here's another interesting tidbit: When I wrote The Mysterious Valley for D.A.M.N. #1, I included troglodytes that allude to the Sleestaks from The Land of the Lost, but I didn't cut anywhere as near to the bone as the author has here. If you are looking for usable Sleestatistics, this adventure kit has you covered!

Bounty Hunters of Ur-Hadad: Adam Muszkiewicz provides a kit for dealing with PC bounty hunters in Ur-Hadad. It is easily used in other settings, and is a worthwhile part of any judge's toolkit.

Axes of the Metal Gods: The Rickenbastard: Adam Muszkiewicz provides the "great axe of a red-brown unknown metal" that belonged to the unstoppable, insatiable Lemm the Killmaster.

Heirloom Weapons: Author Donn Stroud provides a means to describe heirloom weapons that your 0-level (or more potent) PC might be carrying. They will not all be magic, but some of them will be. Only the judge knows for sure. This is an article that is of value to any judge, using any campaign setting. Again, it belongs in any judge's toolkit.

Dungeon Insert #2: Starcophagus of the Crimson Prophet: The author for this Dungeon Insert is not listed, although Adam Muszkiewicz seems a likely candidate. This is solid stuff, but if you use it outside of its Ur-Hadad setting you'll have to create your own Prophesy of Zemuel Lek. Or just use #4.