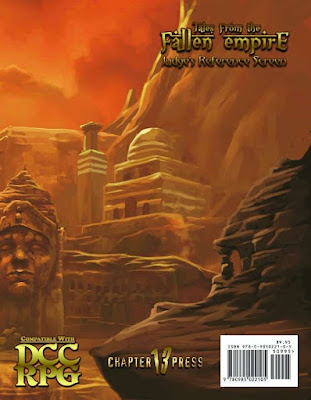 The Tales From the Fallen Empire Judge's Screen was written by James Carpio with art by Eric Quigley and Ben Morgan. The publisher is Chapter 13 Press.
This product is a zip file containing 5 different files: the cover, and multiple versions of the Judge's Screen, include a deluxe screen in both landscape and portrait format. I own several Judge's Screens for Dungeon Crawl Classics, and I am still sad that this is not available in print on heavy cardstock. I would buy it for the artwork alone.
While most of the artwork on other Judge's Screens focuses on the gonzo, or the varied nature of Appendix N-type gaming, this one drips solid sword & sorcery. These are not just screens that would be useful as a judge - the Ready Reference Booklet has me covered there - but simply to sit across from while someone else judged. It would certainly set the tone.
Obviously, this product ties in directly with Tales From the Fallen Empire.

Tired of popping open your DCC Core rulebook to consult the Crit tables? The Tales from the Fallen Empire Judges Screen contains useful combat tables for the Dungeon Crawl Classics RPG by Goodman Games and the Tales From the Fallen Empire Campaign Setting.  The screens feature the beautiful art of Eric Quigley depicting the fallen City-State of Y'Mataar on one side and useful tables on the inside. The download includes the original three panel screens in landscape and portrait and two new screens with more information for both DCC and tales.