Tales From the Magician's Skull #5 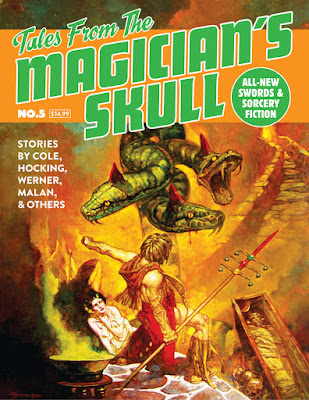 Tales From the Magician's Skull #5 was written by Howard Andrew Jones, Adrian Cole, James Enge, John C. Hocking, Violette Malan, Adrian Simmons, C.L. Werner, and Terry Olson (DCC statistics). Art is by Sanjulian (cover), Chris Arneson, Randy Broecker, Samuel Dillon, Jennell Jaquays, Doug Kovacs, Peter Mullen, and Russ Nicholson. The publisher is Goodman Games.
Disclosure: I backed the successful kickstarter for a four-issue subscription beginning with issue #2, and ending with this issue.
As with all entries in the Tales From the Magician's Skull series, I will again be focusing on the gaming material provided. This should not be taken as a criticism of the issue's excellent fictional content; it is simply a consequence of the blog's focus on treasures for the Dungeon Crawl Classics game system!
It should be noted that statting out materials from fiction is as much an art as it is a science. Sometimes the game material is inspired by the source material more than it is a faithful reproduction thereof. The same is the case here.

In a blog post about creating monsters for Dungeon Crawl Classics, i wrote "when you are reading some fantasy or science fiction novel (in Appendix N or otherwise), keep a notebook by your side. Jot down quick stats for the creatures you encounter. Some of these you might want to revise later for your own adventures. If you encounter an interesting idea, write it down! The very act of doing so will make it more likely to come to mind when you are stuck for ideas." Really, Terry Olson's The Monster Pit columns are really a Master Class in doing the same thing.

Pool of Memory: Two monsters are statted out: the memory crystal and the related mouth-plants. These are good examples of monsters that attack more than just hit points.

Guardian of Nalsir-fel: The ventriloserpent is a big snake with the ability to throw other people's voices.

In the Corridors of the Crow: We are supplied statistics for the carapaced mauler.

Dreams of a Sunken Realm: We are treated to water demons (another un-dead swarm, see issue #4).

Demons of the Depths: Terry Olson stats out Samebito (a summoned shark-demon).

This issue only had two pages for The Monster Pit, which did provide some useful monsters. Although this is the least interesting issue so far from a game content perspective, that does not make it uninteresting. Given the constraints of the inspirational material (some stories provide more new things to give statistics to than others) and presumably the space constraints (I assume Goodman Games provides a word count/space consideration based on the length of the tales in a given issue), I am happy with what is here. If I had to choose just a single issue for game content, though, this would not be my first choice.

Experience the sword and sorcery adventure that is Tales From The Magician’s Skull #5!

Behold! I have fashioned a magazine like those from fabled days of yore. It overflows with thrilling adventures. There are swords, and there is sorcery. There are dark deeds and daring rescues. There are lands where heroes fear to tread. Dare you imagine it? Picture this as well — maps to wondrous and terrible places. Electrifying art for every tale. Guides to bring the terrors within to your own game table. All I lack are a few paltry shekels. Grant them to me, and I shall fling open a new portal to a world of ancient wonders! Join me, mortal dogs! Together we shall storm the gates of Valhalla!