Tales From the Magician's Skull #2 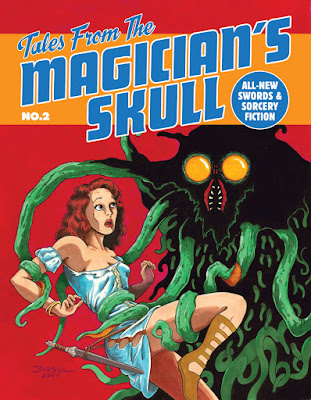 Tales From the Magician's Skull #2 was written by John Hocking, James Stoddard, James Enge, Nathan Long, Sets Uzume, Violette Malan, Dave Gross, and Terry Olson (DCC game statistics). Art is by Samuel Dillon, Jennell Jaquays, Doug Kovacs, Cliff Kurowski, William McAusland, Brad McDevitt, Russ Nicholson, Stefan Poag, Chuck Whelon, and Diesel LaForce (cover). The publisher is Goodman Games.
The Martian Vizier talked about this issue here. If you are interested in Tales From the Magician's Skull primarily as a conduit for fiction, the Vizier's Views will supply that information. As happy as I am that an outlet for new sword & sorcery fiction in exists, in this blog post I am focusing on the issue's gaming material.
Disclosure: I backed the successful kickstarter for a four-issue subscription beginning with this issue. I am also the writer of the afore-linked Vizier's Views article.
At with the first issue, it should be noted that statting out materials from fiction is as much an art as it is a science. Sometimes the game material is inspired by the source material more than it is a faithful reproduction thereof. The same is the case here.
Trial by Scarab: Stats are provided for the great mud scarab, knock-out powder, and the magical message vial.
Day of the Shark: Stats are provided for the tegula (a nasty marine lifeform like a cross between a manta ray and an octopus, with a paralyzing sting). The Dread Ones, which can be bonded with via patron bond, live in the Abyssal depths of the ocean. Invoke patron results are provided, but the enterprising judge is left to develop the rest.
Stolen Witness: Described is the Witness Stone. Imbued with the powers of Law, it compels you to tell the truth. If you are a wizard, it might do more....
Blood of the Forest-Born: To the courses in Appendix C of the core rulebook, you can now add the Curse of Frenzy. You also get potion information for Atseska’s Kiss to envenom your blade.
Break Them on the Drowning Stones: Terry Olson provides the 3rd level ritual spell, create arcane  twins. "This ritual spell requires three arcane casters: the moderator and the two to be twinned. Because it permanently alters two willing subjects, the casting time is a grueling 24 hours during which there can be no interruptions for any of the participants."

A Soul’s Second Skin: Here, Terry Olson provides the 2nd level spell, soul transference. It does pretty much what you would expect, with the added bonus that a soul can be transferred to (and animate) a recently dead body.
Shuhalla’s Sword: Heaven’s Tears are spore-releasing pink meteors that can create spore singers. Statistics for spore singers and sport corpses are also provided. Infection is likely. If you live near the impact of one of these meteors, your village is a DCC funnel adventure waiting to happen, and the wait will not be long. Terry Olson also supplies DCC stats for the flying sword, which has "the intelligence and personality of the soul willfully given to it."
Tales From the Magician’s Skull is a fantasy magazine dedicated to presenting all-new sword-and-sorcery fiction by the finest modern crafters in the genre. These stories are the real thing, crammed with sword-swinging action, dark sorceries, dread, and ferocious monsters — and they hurtle forward at a headlong pace.
Issue #2 features fiction by John Hocking, James Stoddard, James Enge, Nathan Long, Sets Uzume, Violette Malan, and Dave Gross. The magazine is edited by Howard Andrew Jones and published by Joseph Goodman of Goodman Games, with layout by Lester B. Portly.
Each story is lovingly illustrated by industry stalwarts, and issue #2 continues the amazing high standards of art from the first issue.
Get It Here!
Posted by ravencrowking at 09:51