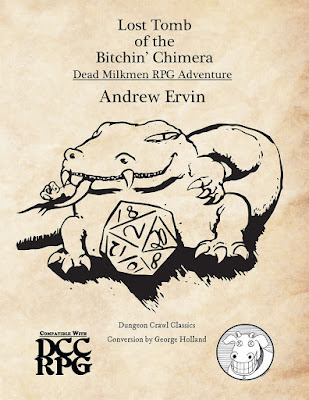 DCC Conversion: Lost Tomb of the Bitchin' Chimera is a DCC conversion by George Holland of an OSR adventure (level 3 to 5) by Andrew Ervin. Art is by Justin Sirois in both products, with cartography by Niklas Wistedt/Paths Peculiar in the original product. The publisher in both cases is Severed Books.

This entry jumped the queue because the DCC Conversion (which is Pay What You Want) does not contain the actual adventure. You will need to buy the OSR version to make good use of the conversion. So, if you are thinking "A new DCC adventure is worth at least X dollars!" you will want to take into account the price of the original work.

The adventure itself is officially licensed by the Dead Milkmen, No DCC level range is given, but somewhere around 1-3 is probably appropriate. This was intended as a one-shot adventure. As with adventures like Rock God Death Fugue, Null Singularity, and Black Sun Deathcrawl, it is fun to imagine ways in which the product could be worked into a larger campaign. Really, this one is strange even by DCC standards, and your PCs will feel more like victims of a bad trip than protagonists of a sword & sorcery novel. This isn't necessarily a bad thing, but it is something you should be aware of.

The adventure could easily be set in Narcosa by way of the Sandsea. There is even a Drug User class in The Class Alphabet which you could use. You might also be able to throw this one into an Umerica game without too much trouble. It will still seem like some sort of drug trip for the characters. If you read the description of the adventure, which is included below, you will understand what I mean.

There is a Crystalline Tree that a clever judge could link to The Palace of Unquiet Repose in a rather nasty way. The contrast between the very serious and the very silly could be interesting, but the Lost Tomb of the Bitchin' Chimera dares you to even try to take it seriously.

This is also, let's face it, a pretty bare-bones conversion. If the adventure took itself seriously, I would be bringing up all sorts of problems the judge is likely to face based on the NPCs alone. Let alone the adventure's use of Charisma and Comeliness in a way that is not going to map perfectly (or even, in some cases, well) to DCC's Personality. But the adventure does not take itself seriously, and the odds are that, if you are running it, you will not be taking it seriously enough for the conversion problems to matter.

Severed Books is thrilled to announce Lost Tomb of the Bitchin' Chimera, an officially licensed Dead Milkmen roleplaying game module set in the weird world of Tiny Town. Written by Andrew Ervin and illustrated by Justin Sirois, this one-shot adventure blends fantasy and punk into a hilarious story your players will never forget.

A monstrous seabird is terrorizing the hamlet of Tiny Town. The distraught Mistress Brownnose calls for aid. If our adventurers hope to placate the beast, they must cross the Swampland of Desire and find the Life-Is-Shit Boneyard. There, if they’re brave enough—or dumb enough—to enter the lair of the Burrow Owlbear, they might just find the Tomb of the Bitchin’ Chimera.

The adventure is ultimately system-agnostic, and can also be enjoyed using the rules of the world’s greatest roleplaying game. It has been designed for player characters of levels 3 to 5 and you can play it as a stand-alone game or easily fit it into your ongoing campaign.

Remember, the DCC Conversion is not sufficient alone.