The Temple of the Hamster 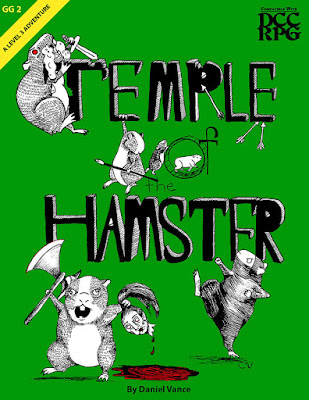 The Temple of the Hamster is a 3rd level adventure by Daniel Vance. Art is by Carmin Vance, Kevin Vecchi, and Daniel Vance (including cartography). The publisher is Vance Games.

Daniel Vance has a gift for mixing absurdity with serious content, creating adventures that are, on one hand, as silly as you could want, and on the other hand filled with blood and frankly disturbing images. While this is all sort of a laugh, and you are probably using the supplied pregenerated characters, there is something awful about the basic premise: oversized rodents have infiltrated the town, are pretending to be human, and their Hamster God is starting to flex his furry muscles again.

I wouldn't run this as part of a grindingly serious campaign modeled off of the Conan stories of Robert E. Howard or The Lord of the Rings, but in my home game, where Mutant Crawl Classics characters and Dungeon Crawl Classics characters rub elbows? Very much so. And I wouldn't even bother making the PCs go to Narcosa first. Obviously, The Temple of the Hamster would be a very fun (and memorable) convention game!

What I am trying to get across here (without spoilers) is that this adventure is absolutely absurd in its basic premise and some of its content. But, given that you accept that premise (and the content that goes with it), it is not written as a joke adventure. The cover actually does a good job of getting across the tone - very funny until you get to the severed head and the pool of blood. And, okay, yes, it is still funny then, but you might not want that to be your character!

The town of Kamis lies in a panic. Townsfolk are missing and city watchmen lie dead; their sides split open from being over stuffed with grain. A stalwart cadre of adventurers must explore the town of Kamis and uncover the terrible mysteries of the Temple of the Hamster. These adventurers must brave terrible traps and minions before facing the dread peril at the heart of the temple. The Temple of the Hamster is packed with hamster style adventure and has been redesigned to have 100% more hamster wheels and mayhem.