Tales of the Shudder Mountains 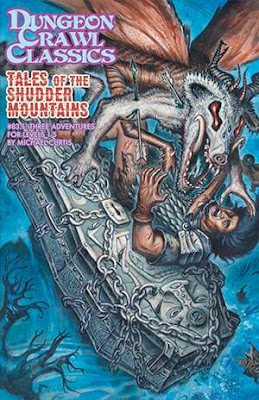 DCC 83.1: Tales of the Shudder Mountains was written by Michael Curtis. Art is by Doug Kovacs (cover), S.S. Crompton (cartography), Stefan Poag, and Michael Wilson. The publisher is Goodman Games.

This product is three short adventures (or "Tales") which take place in the Shudder Mountains (first introduced in The Chained Coffin).

This product continues the practice of re-using cover art to indicate that something is part of the same setting, similar to Harley Stroh's Peril on the Purple Planet and Journey to the Center of Aereth. It is a good system to indicate that a new produce belongs with a particular setting, along with the module numbering and the digest-sized format.

The "Tale" format in this product has each adventure starting with a short bit of folklore that the PCs might be told around the fire when visiting the Shudfolk. This is fantastic, as it feeds directly into the setting itself. and is reminiscent of the source material. A clever judge could seed these "Tales" (and similar) early in a Shudder Mountains campaign, so that when the PCs encountered the reality behind the tale there would be a wonderful sense of frisson.

Tale 1: The Grave Pool (level 4): Sooner or later a PC is going to die, and what if your party is brave foolhardy enough to try to bring them back? Adventures like Blades Against Death and The Revelation of Mulmo aren't appropriate for the Shudder Mountains, but this one is. There is a nice reference to Manly Wade Wellman's The Little Black Train.

Tale 2: Moonricket Bridge (level 1): This one is a ghost story. And, while there is something to fight, like the best ghost stories understanding and compassion lead to the best possible outcome. Too often, ghost stories are not really about understanding the past. This one is. It plays to the strengths of the setting, and it plays to the strengths of Dungeon Crawl Classics. It is thoroughly Appendix N of the Who Fears the Devil? type.

Tale 3: The WitchMan of Darkweather Mountain (level 5): Here is another example of an adventure where the PCs may Quest For It and get something other than what they bargained for. Or they may get exactly what they are after, if they can both overcome the opposition and are reasonably lucky. Neither this tale nor The Grave Pool simply messes with player hopes...but PCs do take risks to gain the benefits they hope for!

If you needed any more proof of Michael Curtis' firm mastery of folkloric Appalachian-style Dungeon Crawl Classics, this product delivers. Much of the Shudder Mountains material (if not all!) would rock mightily in a Weird Frontiers game as well, and a judge could easily use the Shudder Mountains as a conduit between worlds, like the "thinnies" in Stephen King's The Dark Tower series. Honestly, as tied as these adventures are into the feel of the Shudder Mountains, nothing would prevent a judge from making slight modifications and placing them in another campaign milieu.

This digest-sized adventure module presents three short encounters in the Shudder Mountains. All are compatible with the setting presented in DCC #83: The Chained Coffin, and this module is the perfect size to be stored in your boxed set! The adventures are inspired by the works of Manly Wade Wellman and continue the “backwoods fantasy” theme established in DCC #83: The Chained Coffin.