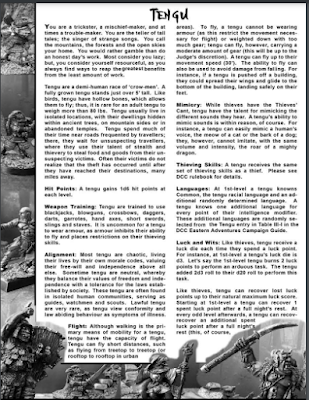 The Tengu is an "Eastern Adventures" character class written by Mark Tasaka (who presumably did the art) and published by Old School Adventures.

You are a trickster, a mischief-maker, and at times a trouble-maker. You are the teller of tall tales; the singer of strange songs. You call the mountains, the forests and the open skies your home. You would rather gamble than do an honest day’s work. Most consider you lazy; but, you consider yourself resourceful, as you always find ways to reap the greatest benefits from the least amount of work.

If you are unaware of what a tengu is, here is a quick description. In this case, we are looking at a mischievous bird-man, rather than a celestial dog-man, a near god, or a master swordsman. Like elves, tengu went through numerous incarnations before the role-playing game industry appeared!

Essentially, this character is a thief with a mimicry ability and limited flight. There is no disadvantage given to offset these extra abilities, but, unlike a human thief, it is pretty easy to determine just what an (undisguised) tengu is. That alone may be enough to "balance" the class for DCC purposes.

In any event, the class is clearly understandable, playable, and describes exactly what it intends to. Trickster crows/ravens are found in other mythologies, so that with a simple name change, the tengu could fit into a North American milieu in particular. This might be appropriate for a Black Powder. Black Magic or Weird Frontiers game. If the game is set after largescale Japanese immigration occurred, there might be both native and Japanese versions of this class operating in the campaign milieu. Tengu might also appear in settings like Nowhere City Nights or Bronx Beasts without any difficulty at all.

Of course, a fully developed Asian setting for Dungeon Crawl Classics would also be welcome! Paul Wolfe did some work along this line in D.A.M.N. Magazine #2 and elsewhere. (And, thanks to Ariel Churi, I have learned that Old School Adventures does have a 14-page DCC Eastern Adventures Campaign Guide).

There is a tengu character generator available here (scroll down).

Tengu are a demi-human race of ‘crow-men’. A fully grown tengu stands just over 5’ tall. Like birds, tengu have hollow bones, which allows them to fly; thus, it is rare for an adult tengu to weigh more than 80 lbs. Tengu usually live in isolated locations, with their dwellings hidden within ancient trees, on mountain sides or in abandoned temples. Tengu spend much of their time near roads frequented by travellers; there, they wait for unsuspecting travellers, where they use their talent of stealth and thievery to steal food and goods from their unsuspecting victims. Often their victims do not realize that the theft has occurred until after they have reached their destinations, many miles away. ....