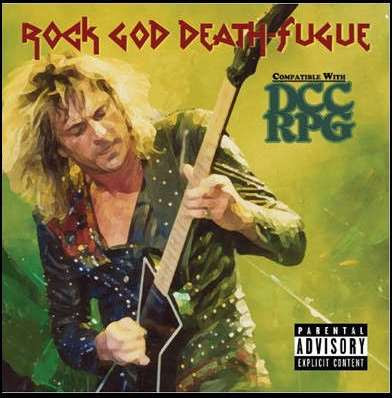 Rock God Death-Fugue was written by Steve Bean with fair use, public domain or CC BY-SA illustrations. The publisher is Steve Bean Games.

Rock God Death-Fugue is similar to Country Crawl Classics, Inferno Road, Null Singularity, and Black Sun Deathcrawl, in that it is a one-shot adventure that, in the end, the PCs are not expected to "win". They can, however, have better or worse outcomes.

In this case, your characters are members of a heavy metal band on on the German leg of its first world tour. Everything that can go wrong will go wrong, and everything that can go right will also probably turn out to be wrong in the long run. This is the rock-and-roll lifestyle, baby, and no one gets out of it alive...or at least, not significantly worse for the wear.

Every Rock God also has a dark flaw that influences role-playing, and manifests in various encounters.

Two second level spells, aura of the Dark Muse and the Dark Muse provides, are included in the adventure. Their applicability to other settings is open for debate, but it is not at all impossible that these could see play outside Rock God Death-Fugue itself.

One cool potential use for this product would occur, in particular, in a post-Apocalyptic setting, such as Mutant Crawl Classics or the Umerica of Crawling Under a Broken Moon: After playing through Rock God Death-Fugue, the players' new characters are reincarnations of their band-mate PCs. Events in the funnel allow each player to choose a survivor to "remember" past events. Depending upon how Rock God Death-Fugue plays out (there is a section called "Burn Out, Fade Away or... Worse?"), each new PC may have some modifications. Penalties might even be removed if they can somehow "best" the other PC(s) who stole their limelight in their previous incarnation....

In fact, those modifications could replace the funnel if characters were created at 1st level (or higher).

Rock God Death-Fugue "explores themes of artistry, envy, excess, hubris and the cost of immortality-through-popular-media." Judges are warned that, "if you’re going to play it in public, make sure you’re in a place where you won’t cause (yourself) problems if your players get carried away." Because they will.

The PCs are “rock gods” weaving musical “magic” and indulging in all the debaucheries and dangerous habits of the rock ‘n’ roll lifestyle. To make matters worse, the PCs all show up listening to Writhe Through Shadow by the band Atramentous – also known as “The Cursed Album.” It’s certain they’re headed for a bad end, the only question is whether they go out in a blaze of glory or as sad self-parodies like Axl, Elvis or the Ozzy of The Osbournes era.

The adventure alternates between encounters on the road that threaten to derail the tour – or worse – and the band’s shows. In concert, egos, insecurities & aspirations to true artistry take over, creating PvP musical duels. The outcome of these duels determine how history remembers each rock god!

ROCK GOD DEATH-FUGUE is a 8.5" x 8.5", graphics-rich product designed and laid out as the liner notes of Writhe Through Shadow, the legendary "Cursed Album" by the fictional alt-rock band Atramentous.