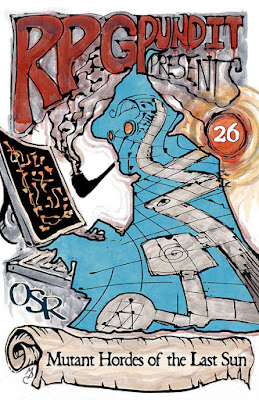 RPGPundit Presents #26: Mutant Hordes of the Last Sun was written by RPGPundit, with artwork by Michael Clarke, Mikesilent, ddraw, gertot1967, and Vitaly_Gertsik. The publisher is Precis Intermedia.

Referencing RPGPundit Presents #15, #16, and #20, this volume provides a quick and dirty method of generating mutants. It could be considered compatible with the method described in Crawling Under A Broken Moon #2, or could be used to make NPC mutants in a Mutant Crawl Classics campaign.

In the gonzo world of the Last Sun, human beings are an endangered species. The time of the Great Disaster caused an enormous amount of ecological damage to the world. Not only did many humans die, but many more were mutated into horrific monsters and monster-races. Create mutant characters for your gonzo games, from the Color and Gold Mutants to the Vegan and Mud Mutants. Determine special abilities like the cyclops, warted, and psychic.