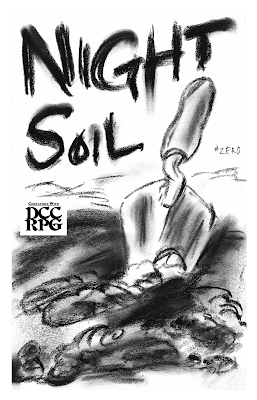 Night Soil #0 is the first of what are intended to be eleven issues of a zine inspired by artwork in the 4th printing of the Dungeon Crawl Classics core rulebook. It contains monsters, magic items, spells, and more. Each listing tells you exactly what page to look at for the inspirational artwork.

When I created Pesh Joomang for the Angels, Daemons, and Beings Between Indiegogo campaign, I did something somewhat akin to this. All of the monsters in the first level patron spell, creatures of the visual hieroglyphics, come from DCC illustrations on the pages equal to the spell range. Likewise, the Artefacts of Pesh Joomang were based on items Goodman Games had produced. This patron was printed in the Extended, Otherworldly Edition of that tome.

The only overlap I noticed is that I used an illustration for the  immortal death worm, and bygrinstow was inspired by the same illustration to create the spell shadow blend.

Within this modest-sized zine, you will find three complete spells, at least seven creatures, eleven magic items, and nine other entries that defy easy classification. If is a fountain of creativity. Often, when discussing zines, I have given a list of contents and described each item separately, but that would be a disservice to both writer and reader in this case.

Night Soil is warm and malleable.

It’s made from assorted, random things which have been consumed, digested, and may or may not resemble what they started off as...

Night Soil contains a bunch of grab-and-use elements for your campaigns and one-shot games -- all inspired by the ART in the 4th Printing of your favorite RPG.

Inside you’ll find new magical items, new spells, new threats, and new ideas to push your games into new directions and give your players something to mess with.

Warm up your dice, and maybe set some extra character sheets within arm’s reach...

This is Night Soil.

Get It Here
Posted by ravencrowking at 08:37